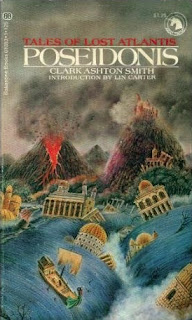 Clark Ashton Smith (1893-1961) was part of the Lovecraft literary circle, corresponding frequently and at great length with Lovecraft and other masters of weird fiction such as Robert E. Howard. They frequently exchanged ideas and often borrowed characters and settings from each other. It was an incredibly fruitful arrangement.

Lovecraft and Howard achieved major cult followings by the 1960s and their popularity remains extremely high. Smith has never quite achieved the same level of popularity with the book-buying public although among true aficionados of weird fiction he is generally regarded as being their equal.

Smith was a writer who relied on atmosphere and style to an extreme degree. Many of the great pulp weird fiction writers were fascinated by the idea of civilisation in decline. Lovecraft wrote about civilisation decay and degeneration. Smith was obsessed by civilisational decadence. His great strength was that his style was in itself decadent and therefore perfectly matched his material. His prose is more self-consciously literary than Lovecraft’s but his prose is even more purple. Prose just doesn’t get any more purple than this. But it works.

The bulk of Smith’s short stories belong to several cycles, the best-known being the Zothique cycle. Somewhat lesser known are the handful of Poseidonis stories. Poseidonis is a mythical island, the last remnant of the lost continent of Atlantis. It is a world of sorcery, and of power struggles between great (although frequently evil) sorcerers. Smith’s Poseidonis cycle comprises eight stories and poems. I will be considering three of the stories here (and they happen to be three very fine stories).

In The Last Incantation the ageing but powerful sorcerer Malygris discovers that even his formidable magic cannot recapture the memories of youth. There’s no real horror in this tale. It’s more a story of melancholy and perhaps of the limits of power.

In The Death of Malygris the King, Gadeiron, suspects that the much-feared sorcerer Malygris may have finally died. But so powerful is this sorcerer’s magic that no-one wants to take the risk of entering his tower to find out if he is really dead. A sorcerer with Malygris’s powers can be dangerous even when dead. The King has the services of the master necromancer Maranapion but he knows that will not be enough. He recruits twelve more sorcerers but perhaps even that may not be sufficient to deal with Malygris.

The Double Shadow is the tale of a master necromancer and his acolyte who conjure forth a demon whose existence was previously unknown, a demon from the impossibly remote past, from the age of the serpent-men. It might have been infinitely wiser not to have conjured this particular demon. 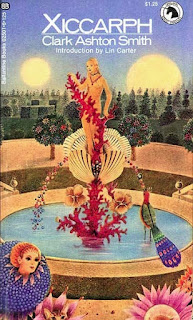 While Smith could at a stretch be considered a writer of sword-and-sorcery tales the emphasis was very much on the sorcery (certainly compared to Howard who put the emphasis on the swords). These three stories are entirely tales of sorcery. There’s no action at all, but there’s plenty of horror  and there’s as much weirdness as any reasonable person could desire.

Among Smith’s lesser known works are his interplanetary stories, set on Mars or on several imaginary planets. They’re perhaps as close as he got to science fiction and that’s not very close.

The Flower-Women has a science fictional setting but it’s still basically a story of sorcery, concerning a sorcerer who becomes bored because his magic is too powerful and he no longer faces any real challenges. He gives up (temporarily) most of his magic to pursue adventure on one of the several planets of which he is ruler. The flower-women really are flower-women - half carnivorous plant and half woman. The flower-women are being menaced by reptilian sorcerers who seem like they might provide an invigorating challenge.

The Monster of the Prophecy is much closer to actual science fiction. A poet, unable to face poverty and the indifference of the world, is about to find a watery death by throwing himself off the Brooklyn Bridge. A strange old man offers him an alternative. The old man is an alien wizard and he transports the poet to a distant planet inhabited by very strange creatures. The alien wizard is more scientist than wizard and he intends to use the poet to further his ambitions. The plan doesn’t work out as neatly as he’d hoped. There’s no actual magic in this story, which is pretty unusual for a Smith story.

The Vaults of Yoh-Vombis is one of Smith’s Mars stories. This is Mars as imagined in the early 1930s, an inhabited world with life being mostly clustered about the canals. An archaeological expedition is exploring the ruins of the impossibly ancient city of Yoh-Vombis, a city built by a long-extinct Martian race rather different from present-day Martians. Yoh-Vombis is far from the life-giving canals and there is no possibility that anything could be alive in those desolate ruins. What the expedition finds there is an unimaginable horror, the secret to the disappearance of the people of Yoh-Vombis. This is a very Lovecraftian story, in both content and style.

I still regard the Zothique stories as being Clark Ashton Smith’s greatest achievements but his other story cycles are well worth investigating. Highly recommended.
Posted by dfordoom at 10:50 PM