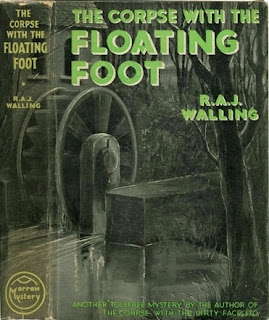 The Mystery of Mr Mock (the US title was The Corpse with the Floating Foot) was written in 1937 by R.A.J. Walling and of course features private detective Philip Tolefree.

Tolefree and his friend Farrar (who narrates the story) have joined another old friend of Tolefree’s, Professor Pye, for a period of relaxation in the country. They have chosen the village of Combe in Wiltshire. Combe’s main claim to fame (indeed its only claim to fame) is the Wheel Inn. This hotel was converted from an old water mill and the water wheel is still in existence. It has to be admitted that the Wheel Inn really is most picturesque as well as being rather comfortable while Combe itself is a thoroughly pleasant little spot.

The time passes most agreeably with considerable entertainment being provided by two of the other guests at the Wheel Inn, Mr Mock and Mr Annison. These two gentlemen argue constantly and their arguments include an extraordinary leavening of profanity. This attracts the ire of the godly Mr Cornwood who does his best to save the souls of these two reprobates. Mr Mock and Mr Annison might dislike one another but there is one thing that unites them - their mutual detestation of Mr Cornwood.

And then, on Guy Fawkes Night, Mr Mock vanishes. His ancient car vanishes as well. Actually he’s not the only one who vanishes after that night.

There are a couple of odd little details that worry Tolefree. He’s particularly worried by Mr Mock’s hat. These little details will lead to a grisly discovery (which we already know about since the book opens with the finding of a corpse and we then get a flashback that fills in the story of the previous four days).

The discovery of the corpse raises more questions than it answers. Tolefree would love to have a glimpse of a motive but at this stage there’s absolutely no sign of one. He is convinced that no real progress towards solving the case can be made without knowing why the man was murdered.

This is a fine example of making the most of the unusual features of the splendid setting. The water wheel itself plays a part in the story and the old mill building turns out to be a most curious structure with all sorts of secrets hidden within its depths. 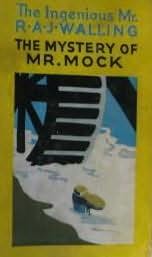 Combe itself is quite an entertaining little place with more than its fair share of slightly odd and colourful characters. The landlord of the inn is a retired naval captain who has been known to forget that on land his authority is no longer unlimited. Professor Pye is a genuine eccentric and his philosophical debates with Tolefree are quite amusing. Mr Mock and Mr Annison are likeable old sinners. Mr Cornwood is a bit of a stereotype, the priggish devout sort always seeking to save souls, but he has some unexpected hidden depths. There’s also the village Don Juan, young Calderstone, who may be less empty headed than he appears to be.

While this is a book that is very much in the puzzle-plot mould it’s not just a matter of looking for clues. The personalities of the characters do count as a factor that Tolefree cannot ignore.

Alibis play a vital role and, rather unusually, the alibis have to be remarkably specific since Tolefree is eventually able to fix the time of the murder almost precisely.

Fishing will be important as well, although in this case the fishermen are not necessarily after fish.

This is not one of those detective novels in which the detective settles himself in his favourite armchair, fills his pipe and proceeds to solve the entire mystery without leaving his study. Tolefree will have to do a great deal of tramping about, he will have to display considerable energy and agility and will even have to put himself in harm’s way on occasion. He even has cause to be grateful that he brought his revolver along with them.

In fact in fairness to Walling it should be pointed out that most of Tolefree’s cases do involve quite a bit of leg work and at times some danger.

If you’ve always assumed that Walling was merely one of the more obscure writers of the Humdrum School and therefore of little interest The Mystery of Mr Mock might just change your mind. It’s really a thoroughly enjoyable tale of detection. Highly recommended.
Posted by dfordoom at 1:46 AM