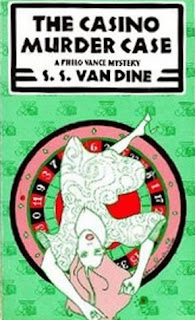 The Casino Murder Case was the eighth of S.S. Van Dine’s Philo Vance mysteries. While the theory has been advanced that the quality of the Philo Vance books declined precipitately towards the end of the series I found this 1934 entry to be more than satisfactory.

It begins with Vance receiving a typewritten letter warning him that some unspecified doom is about to descend of the wealthy Llewellyn family. It’s the sort of letter that might well have been sent by a crank but there’s something about it that worries Vance. The note particularly warns Vance to keep an eye on young Lynn Llewellyn on the following night when he will be visiting his uncle Richard Kincaid’s casino.

The young man does indeed suffer a serious misfortune after winning big at the casino. The really odd thing is that his wife suffers the same misfortune at the same moment, on the opposite side of the city. In both cases poison is involved but how could someone poison two people simultaneously miles apart?

And the poisoner has not yet completed his (or her) work for the evening.

Right from the start Vance has the feeling that both he and the police are being toyed with, but in a very subtle and ingenious way. There are clues that seem too obvious, but are they deliberately intended to seem too obvious? Is the killer trying to point Vance in a particular direction, or simply trying to make Vance think that he is doing so?

There have been three poisonings, but only one was successful. There are possible motives but none that seem sufficient to lead to murder. On the other hand there are so many complex personal dislikes and resentments within the family and their circle of hangers-on that nobody can really be eliminated from suspicion.

The murder methods seem more conventional than in Van Dine’s other novels but he makes up for this by making the circumstances surrounding the murders and attempted murders so puzzling. And once Vance starts to come up with possible solutions we find that they’re not so conventional after all.

As always with Van Dine the crimes take place among the rich and famous. Glamorous settings were an essential part of the Van Dine formula. That’s something I don’t have a problem with. One of the privileges of being rich is that if you want to commit murder you can do so in an imaginative and stylish manner. Murder might be unpleasant but there’s no reason for it to be commonplace or sordid.

Vance is in fine form, fretting about cultural influences on ancient Sumerian civilisation and missing out on dog trials (we already know from The Kennel Murder Case that Vance has a passion for dogs), and on the vanity of human passions. He also indulges himself in frequent biblical allusions.

As usual his friend, District Attorney John F.-X. Markham, is mystified by the workings of Vance’s mind. Sergeant Heath of the Homicide Squad is equally mystified but he’s accustomed to Vance’s peculiar methods.

Psychology certainly plays a role in this story. Vance is sure that if he can understand why the murderer has carried out the crimes in a particular way he can crack the case. The difficulty is that he’s dealing with a group of people all of whom are perhaps slightly psychologically abnormal.

This one doesn’t have the over-the-top baroque flourishes of The Scarab Murder Case or The Dragon Murder Case but it does have a pleasingly fiendish plot. Highly recommended.
Posted by dfordoom at 12:39 AM