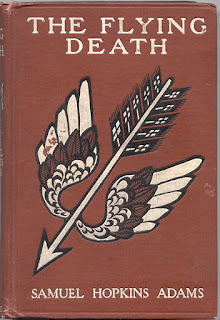 The Flying Death is one strange little book. Samuel Hopkins Adams (1871-1958) was a famous American muckraking journalist in his day although be’s better known to fans of Edwardian crime fiction for his excellent Average Jones stories.

The Flying Death begins with Dr Dick Colton being ordered to Montauk for a rest cure. However he’s not going to get much rest. Apart from the murder and mayhem he will also find love, and that is rarely restful.

He is staying at Third House, the inhabitants of which are a varied lot. There’s Professor Ravenden, a slightly dotty but very eminent entomologist. His daughter Dolly is rather more disturbing to Dr Colton, being very beautiful and altogether the most wondrous specimen of young womanhood he’s ever set eyes on. Dr Colton falls instantly in love. More disturbing in some ways is Helga, equally young and beautiful but gifted (if that’s the right word) with the second sight. Helga had been involved romantically with Dick’s brother Everard until the Colton family vetoed the match. Now Dick decides it would be a fine idea to invite Evarard to Third House. Making things more complicated is Helga’s relationship to newspaper reporter Harris Haynes, since nobody seems to know what exactly that relationship is. Nobody, including Haynes and Helga. The stage is set for some romantic melodrama, all done in a very Edwardian (but rather charming) style.

The action itself kicks off with a shipwreck. Most of the crew of the stricken schooner are saved but one man is brought ashore dead. The only problem is that he can’t be dead, or at least he can’t be dead in the way he appears to have died. It’s simply impossible.

Other murders follow, and they’re all in their own ways equally impossible.

Haynes decides to take charge of the investigation, being convinced that the police would be no use at all. Haynes has been a crime reporter for years so he does know a thing or two about investigating crime and there will be some actual detecting done in this story.

There are some clues but they seem to lead to further impossibilities. There are for instance the tracks on the beach, leading to one of the dead bodies. There’s no doubt about what the tracks are. They are the tracks of a pteranadon, and a rather large one. The fact that pteranadons have been extinct for a hundred million years or so is however a minor problem.

There’s also the matter of the unfortunate pioneer aeronaut, yet another impossible crime.

The most promising suspect appears to be a Portuguese juggler/magician whose act includes some rather impressive knife-throwing feats. Alas even more impossibilities will arise in connection with this suspect.

As you might have gathered Adams throws everything but the kitchen sink into this tale. And it works. He was a newspaperman and he knew how to give the public what it wanted.

In a story from this era that involves both crime and the suggestion of possible supernatural or science fictional explanations you can never be quite sure how the author will play things. Will he produce a perfectly rational solution at the last moment, or will he throw caution to the wind and go for a solution of a truly fantastic kind? Needless to say I have no intention of spoiling the story by telling you which option Adams chooses.

Stylistically the book is very much of its era, which (when combined with the outrageous plot) adds to the charm.

Adams keeps things moving along at a decent clip, both on the mayhem and the romance fronts. Romance in a detective story can have the effect of slowing things down too much but Adams doesn’t allow that to happen.

Is this actually a detective story? You’ll have to wait until the end to find out. Whatever it is it’s a great deal of fun. Highly recommended.
Posted by dfordoom at 3:54 PM