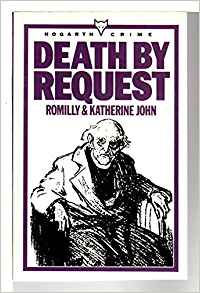 Death by Request was the only detective novel to be written by husband-and-wife team Romilly and Katherine John. Romilly John was the son of the painter Augustus John. The novel appeared in 1933.

The setting is an English country house owned by a certain Matthew Barry, a wealthy man in late middle age with a passion for Greek literature. Matthew’s son Edward is a harmless rather sickly and rather ineffectual young man who spends much of his time in pursuit of the local lepidoptera (which will play an important part in the plot). Matthew’s old friend, the Reverend John Colchester (who narrates the tale), is one of the assortment of guests that you’d expect to find in a country house murder mystery. There’s a blustering and foolish old colonel, a beautiful young widow of slightly doubtful moral reputation, there’s the handsome rake Lord Malvern, there’s Edward’s fiancée Judith Grant and there’s Phyllis Winter, a somewhat hysterical 17-year-old girl.

Of course one of these people is about to be murdered and the others will all be suspects. There is another important suspect, the butler Frampton. Did the butler do it? The police certainly think it’s possible. Frampton is after all a socialist.

The murder victim is found dead in his gas-filled bedroom. It might have been an accident but this possibility is soon dismissed. Suicide is considered next, but also rejected. This is murder.

And this is a locked-room murder mystery, for those who enjoy that sort of thing.

Inspector Lockitt has an abundance of suspects and an abundance of motives to work through. He makes little headway and seems relieved by the arrival of Nicholas Hatton. Whether Hatton is an actual private detective or merely an amateur is uncertain (the latter seems far more likely) but he seems to make more progress than the Inspector. Even he is unable to unravel this mystery and the lovely young widow Mrs Fairfax then tries her hand at detecting, with much greater success.

There are inheritances, there are romantic triangles, there’s blackmail and there’s jealousy. In fact the authors toss in everything but the kitchen sink.

There’s also a twist ending although even in 1933 it was by no means original.

The authors try very hard to maintain a light-hearted and at times almost farcical tone, with mixed success. There are a few amusing moments but the wit is rather laboured.

The locked-room puzzle itself is moderately clever but if you’re expecting the ingenuity and outlandishness of a John Dickson Carr you’re going to be disappointed. The twist ending is reasonably successful.

There are some problems. The pacing is a little slow, with a tendency to over-explain and over-complicate things. It’s the sort of fault you might expect in a first novel. There are plenty of possible motives but none of them seem truly convincing. The more successful writers of golden age detective fiction tried to make the motivations of their killers at least vaguely psychologically convincing. We should feel that the killer is someone who, once the motive is explained, might really have been tempted to commit murder. In this case the authors don’t quite succeed in selling us on the motives. It’s a pity because the plot does show some genuine cleverness.

For a first novel Death by Request shows some promise but presumably it failed to excite the reading public and it marked both the beginning and the end of their endeavours in the genre.

Death by Request is a moderately enjoyable tale if you’re not in an excessively demanding mood. It’s certainly not a must-read. If you can find a copy in the bargain bin or in the library it’s worth picking up but it’s not a book that I’d suggest you go hunting for. I can only give this one a lukewarm recommendation I’m afraid.
Posted by dfordoom at 3:58 AM