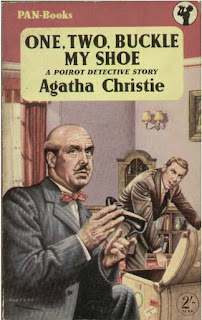 The Second World War is never explicitly mentioned in Agatha Christie’s One, Two, Buckle My Shoe but it casts a long shadow over the book making it a rather interesting Hercule Poirot mystery.

It was published in 1940 but internal evidence suggests it may have been written just before the outbreak of war.

Regarded purely as a detective story it is superb, a classic example of Christie’s ability to lay false scents. She leads the reader by the nose but if it’s any consolation Poirot very nearly falls into the same trap that Christie has laid for the reader.

It starts with the murder of a dentist. As it happens, it’s Poirot’s own dentist who is murdered. It looks like suicide but Chief Inspector Japp is not at all satisfied. The question of motive worries Japp a lot. This is a detective story in which motive is of absolutely critical importance. The case cannot be solved unless the motive can be uncovered. There’s plenty of other evidence but it’s either tantalising ambiguous or downright misleading without a motive. That’s not giving anything away since both Poirot and Japp are keenly aware of this problem right from the start.

Two more murders follow, and the final murder seems every bit as inexplicable as the first. The identity of the murderer seems clear, but once again there’s the vexed question of motive.

Christie has a few other tricks up her sleeve as well. What’s particularly impressive is that even when we know she’s misleading us it doesn’t help us. In several cases we know that what really happened is not what appeared to happen but that just increases our difficulties since it opens up new possibilities that lead us down more blind alleys. She lays more false scents and we follow them, thinking that now we’re on the right track. Christie’s plotting in this novel presents us with cunningly interlocked puzzles.

Poirot firmly believes that a theory is worthless unless it fits all the facts. In this case he finds himself faced with facts that are simply impossible. And yet they are unquestionably facts.

Shoes and buckles do indeed play a part, as do stockings, and ladies’ clothing in general. Poirot is a man who takes a certain aesthetic interest in ladies’ clothing. In this adventure those shoes pose some problems for him.

The time at which the book was written, with Europe on the brink of war and Britain likely to be facing a struggle for existence, clearly had an impact on Christie. The tone is fairly dark. High finance, politics and espionage form the background to the novel. These factors also present Poirot with some ethical dilemmas. If Britain’s survival is at stake how important is the life of an obscure dentist? To Poirot the storm clouds gathering over Europe only make it more important to take a stand for the principle that the lives of obscure dentists do matter. If Britain is worth saving it is because in Britain the lives of unimportant people are in fact very important. And yet he has to admit that there is in this instance a powerful counter-argument.

One, Two, Buckle My Shoe is Agatha Christie at the top of her game, demonstrating not just her mastery of plotting but also her ability to write a novel that succeeds admirably as a detective story whilst also offering just a little bit more. Highly recommended.
Posted by dfordoom at 12:59 AM