Eric Ambler’s The Light of Day 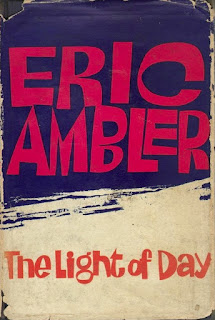 Eric Ambler’s 1962 thriller The Light of Day (also published under the title Topkapi) is both typical and untypical of his work. It’s typical in that it uses a classic Ambler plot device - a very reluctant amateur spy hopelessly out of his depth. It’s untypical in being essentially a light-hearted romp.

Arthur Simpson narrates his tale of misadventure and mishap. Arthur is an Englishman living in Athens. He’s British to his bootstraps. Except that he’s not actually a British citizen, and the British government is determined to keep it that way. He holds an Egyptian passport but the Egyptian government doesn’t want him either. Arthur Simpson’s father was a British officer stationed in Cairo. His mother was Egyptian. He was educated at a minor (very minor) public school in England. Arthur feels entirely British and it is a constant sorrow to him that no-one else seems to share his view of himself.

Arthur is a journalist. At least in his own mind he is, although his career in journalism mostly amounts to his involvement in the production of pornographic magazines.

Arthur earns his living driving a hire car. Even that is not quite true. His main source of income is petty theft. The hire car allows him to pick out likely looking targets at Athens Airport. Rich tourists are usually fairly easy to rob.

The American named Harper seemed like a very promising target. But it all went wrong for poor Arthur. He ended up getting a beating and being forced to sign a very incriminating confession and now Harper is using that confession to blackmail Arthur into doing a little job for him. A very simple job. All he has to do is to drive a car, a Lincoln Continental, from Athens to Istanbul. And he’ll get paid for it.

Now Arthur may be many things but no-one has ever accused him of being stupid. He smells a rat. A very big rat. He is sure the car is being used to smuggle drugs or gold or some other contraband but a thorough search of the Lincoln reveals nothing. Everything goes smoothly until he reaches the Turkish frontier. There it is discovered that his passport is out of date. Other discoveries are made as well. His interview with Major Tufan of the Ikinci Büro (the Turkish counter-espionage service) is not a happy experience. Arthur could be facing a very long prison sentence. But Major Tufan does have some good news for him. He may not have to face the death penalty. In fact he may not even have to go to prison. All Arthur has to do is to work for the Ikinci Büro for a while.

Major Tufan has no idea what Harper and his friends are up to but he has a bad feeling about it. He fears it may be political. The guns and the grenades suggest something rather nasty. He needs Arthur’s help. Arthur agrees, because after all he has no choice at all.

Harper and his pals are certainly up to something but finding out what that something is proves to be remarkably difficult. Arthur talks his way into a job as chauffeur for Harper’s mistress, the glamorous Frau Lipp, but Harper and his friends are extremely secretive and by the time Arthur works out what is going on he may have gotten himself in so deep that he will be unable to escape.

This is Eric Ambler so don’t expect a great deal of action (although there is some definite excitement towards the end). Ambler was concerned with suspense and character, especially character. In Arthur Simpson he has created a wonderfully memorable if rather appalling character. He is a coward, a congenital liar, a sneak, a thief and in fact the description of him by one of his former schoolmasters as an unspeakable little cad is pretty accurate. Arthur’s story is an extraordinary concoction of self-delusion and self-justification. His ability to rationalise away his own failings and weaknesses is breathtaking. In spite of all this it is difficult to dislike Arthur. He’s a rotter but he’s a delightfully entertaining rotter.

Arthur’s outlook on most things is idiosyncratic. If someone is careless enough to leave travellers’ cheques lying about then taking them isn’t really stealing. If telling the truth is likely to have unpleasant consequences then lying isn’t reprehensible, it’s sound common sense. Arthur approves of sex, but not when it’s somebody else who is getting it.

Major Tufan is, oddly enough, the most sympathetic character in the book. For a secret policeman he’s a pretty decent fellow and he’s remarkably patient with his bumbling new agent.

Ambler shows great skill in keeping us guessing almost until the end as to the exact nature of Harper’s plot. This is crucial because the success of the story depends upon Arthur’s remaining in ignorance on this subject until he has well and truly painted himself into a corner.

The Light of Day was filmed in 1964 as Topkapi.

The Light of Day is pure enjoyment, it's extremely amusing and it's suspenseful. You can't ask for more. Highly recommended.
Posted by dfordoom at 5:40 AM