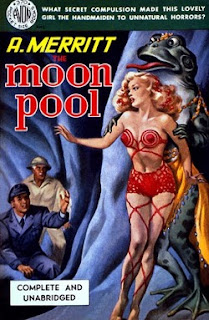 Abraham Merritt (1884-1943), always known as A. Merritt, was a very successful journalist who wrote fiction in his spare time. Most of his stories appeared originally in the pulp magazines of the 20s and 30s and were later republished in novel form.

The Moon Pool, published in 1919, is one of his early works. Like so many of his tales this is a lost world story. The narrator is a scientist named Goodwin. He is told a fantastic story by a fellow scientist  of strange happenings in the ruins of the ancient city of Nan-Matal, situated on a series of artificial islands in the Pacific (and inspired by the real-life ruins of Nan Madol in Micronesia). Accompanied by an Irish-American Royal Air Force aviator and a Norwegian sea captain named Olaf Huldricksson he finds a portal on one of the islands. The portal leads to a chamber in which is found the Moon Pool.

Another scientist, a Russian named Marakinoff, has also discovered the portal. He hopes it will lead him to knowledge that will make the newly arisen Soviet Union the greatest power on Earth. He offers to co-operate with Goodwin and his companions but clearly he cannot be trusted.

The Moon Pool leads to a world far beneath the surface of the Earth, a world inhabited by the descendants of the builders of Nan-Matal and various other races including highly intelligent frog-people.

The priestess Yolara and her consort Lugur (who comes of a race of sturdy dwarves) serve a strange entity known as the Shining One. The Shining One is not so much a creature as a kind artificially created thing composed of lunar lights and force fields. The Shining One possesses great intelligence but it has become a thing of evil, creating a horde of dead-alive zombie-like followers. Yolara and Lugur rule this underground world.

The Shining One was created by the Silent Ones, three members of a very ancient race. They intended their creation to open up new worlds of knowledge for them but they failed to foresee that they would eventually lose control of it and that it would turn malevolent. The Silent Ones are kindly, wise and inquisitive but their pride led them to attempt too much when they created The Shining One.

The Silent Ones are served by their handmaiden Lakla.

The Silent Ones believe they may be able to prevail through the power of fear, but if that fails they will need to call on a still stronger power, that of love.

Merritt is at pains to make it clear that the many extraordinary events of this tale have natural rather than supernatural explanations, so while the story appears to be fantasy it was intended as science fiction. Merritt was obviously much impressed by the new and very strange understandings of the world revealed by quantum physics and relativity, and he uses this new scientific knowledge as an explanation for events that would otherwise seem supernatural.

Merritt had a seemingly limitless capacity for inventing new and fantastic lost worlds. He was very much influenced by Rider Haggard’s great fantasy-adventure novel She, and in turn Merritt influenced writers such as Lovecraft. Lovecraft’s concept of the Great Old Ones and the idea of strange ancient beings whose immense powers make them appear as gods obviously owe a debt to The Moon Pool in particular.

Like all of Merritt’s great novels The Moon Pool is both an exciting and action-filled adventure and a stupendous feat of the imagination. Highly recommended.
Posted by dfordoom at 8:49 PM