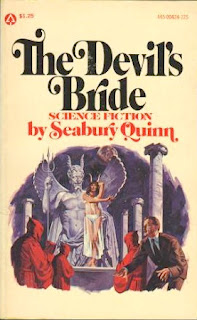 Seabury Quinn wrote quite a few short stories featuring the occult detective Jules de Grandin. The Devil’s Bride, published in 1932, was the only de Grandin novel.

The Devil’s Bride is a tale of devil-worshippers in the United States. When a young woman, Alice Hume, disappears in mysterious (in fact seemingly impossible) circumstances Jules de Grandin soon finds himself on the trail of Satanists.

Alice Hume’s ancestor, David Hume, was himself of mysterious origins. It’s not until de Grandin discovers a manuscript hidden in an old Bible that the truth about Hume’s origins comes out. As de Grandin suspected, there was a connection between David Hume and a sect of devil-worshippers that flourished centuries ago in the Near East. The remnants of that sect survive and they are now operating in New Jersey.

Alice Hume is a descendant of the priests of that cult, and now the survivors of that sect want her back to serve as their high priestess.

What is at stake though is more than just an obscure Near Eastern cult. It is nothing less than an atheist conspiracy, financed by the Russian communists, to undermine western civilisation. This is a conspiracy theory worthy of Dennis Wheatley.

Jules de Grandin and his associates, a doctor named Troubridge (the narrator of the tale) and a detective from the Sûreté in Paris named Renouard, are up against fiends who practise human sacrifice. The conspiracy is also linked to the infamous Leopard Men of West Africa, practitioners of cannibalism.

This is a particularly lurid tale. Quinn never misses an opportunity to have one of his female characters naked. There’s more than a hint of perversity here. There are drugs and there is the dreaded bulala-gwai which is dispersed in a fine mist and comes in two forms - one form renders anyone who comes into contact with it

There’s also plenty of action as de Grandin and his colleagues pursue the Satanists both in the US and in Africa. There are Black Masses and there are primitive jungle rites. As you may have guessed this is a very politically incorrect novel. Delightfully so in fact.

Jules de Grandin is an entertaining hero, a bit like a low-rent (and much more violent) version of Hercule Poirot with his outrageous French accent. He differs from other occult detectives of this period in several ways. Apart from the much pulpier style of this story it’s also doubtful if the occult elements actually count as occult. There are no actual supernatural happenings. It’s more like a sleazy crime story with occult trappings. The criminals are all too human, with the occult essentially serving the interests of fiendish criminal activity. The Devil’s Bride is really a thriller which happens to involve devil-worshippers rather than straightforward criminals.

While the conspiracy theory elements are very reminiscent of Dennis Wheatley, in Wheatley’s books the occult was always a real presence. Quinn simply uses the occult to make an outrageous pulp thriller more outrageous and even sleazier.

The Devil’s Bride is, despite these reservations, a great deal of fun. It belongs at the more disreputable end of the pulp fiction spectrum, but it’s still worth making the acquaintance of Jules de Grandin. Recommended.

The Creation Oneiros paperback edition of The Devil’s Bride also includes a Jules de Grandin short story, The House of Golden Masks, an even more lurid tale of white slavery.
Posted by dfordoom at 2:58 AM