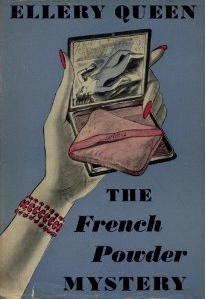 The French Powder Mystery was the second of the Ellery Queen mysteries by Manfred Bennington Lee (Manford Lepofsky) and Frederic Dannay (Daniel Nathan). It appeared in 1930.

The book certainly gets off to a stylish start. French’s Department Store in New York has a window exhibition of modernist furniture. Every day at the same time an employee of the store stages a demonstration of the features of this furniture, including in this case a foldaway bed. On this particular day when the employee presses the button to unfold the bed a corpse is revealed. It belongs to the wife of the owner of the store.

As you expect in an Ellery Queen novel there are plenty of suspects and plenty of clues. But which clues are the ones that matter? The murder could have been committed by almost any member of the French household as Mr French has private apartments on the top floor. There are seven keys to this private apartment, and those keys will assume considerable importance. The murder could also have been committed by any one of several employees of the store, including all the members of the board of directors (a meeting of the board took place in Mr French’s private rooms on the morning of the murder).

The murder might also be linked to a drug ring - the murdered woman’s daughter is a drug addict.

Inspector Richard Queen is frankly baffled, but his son Ellery (an enthusiastic amateur sleuth) is not dismayed by this puzzling case.

As with most of the early Ellery Queens this book contains their famous challenge to the reader - towards the end of the book the reader is informed that he now has possession of all the facts necessary to solve the case for himself, and (as was usual in the Ellery Queen mysteries) the plot is so ingenious that the murderer turns out to be the only person who could possibly have committed the crime.

There’s certainly no disputing the authors’ ability to construct a plot that is like a piece of precision machinery, with each part fitting together so as to produce one and only one solution.

Ellery Queen himself is not the most colourful of fictional detectives but he’s likeable enough. The father-and-son crime-solving team, with the father a professional detective who employs all the conventional methods of a good police officer while the son is a gifted amateur who relies more on pure reasoning, is an effective combination.

The French Powder Mystery is unlikely to disappoint fans of the golden age detective story.
Posted by dfordoom at 2:31 AM