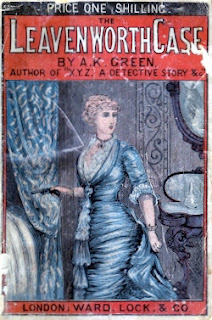 Anna Katharine Green’s 1878 novel The Leavenworth Case is often cited, incorrectly, as the first mystery novel written by a woman. It is nonetheless definitely a mystery novel and certainly one of the earliest to be written by a woman. The crime fiction genre itself was still relatively speaking in its infancy at the time this novel was published.

While the novel is a true example of detective fiction it also has much in common with the sensation novels that were so popular at the time.

New York-born Anna Katharine Green (1846-1935) was the daughter of a prominent criminal lawyer and she went to great lengths to make the novel as realistic as possible in terms of the criminal law, and with such success that it was used at the law school at Yale as a teaching aid on the subject of circumstantial evidence. Green went on to have a very successful literary career, publishing around 40 books.

The Leavenworth Case plunges us straight into the action. Mr Leavenworth has been found shot to death in the library of his home. The nature of his injuries makes it certain that this was not suicide but murder. Mr Leavenworth was a very wealthy man. He had no children of his own but had adopted two nieces, Mary and Eleanore. The terms of his will were rather curious - he left virtually all of his estate to one niece while the other was to get very little indeed.

It is clear, for various reasons, that the murderer could not have left the house after the murder until after the body was discovered the following morning, so one of the people in the house had to be the killer. Both nieces are potential suspects, as is Mr Leavenworth’s private secretary Trueman Harwell and the mysterious visitor who had introduced himself as Mr LeRoy Robbins. Mary’s maid, Hannah Chester, disappeared on the night of the murder, making her a suspect as well.

Mr Leavenworth’s lawyer was out of town at the time of the murder, leaving a junior partner in the firm, a Mr Raymond (the narrator of the novel) to represent the interests of the Misses Leavenworth. Mr Raymond will find himself assisting the celebrated police detective Ebenezer Gryce in his investigation of the case.

There are plenty of red herrings and plenty of ambiguous clues. There are incriminating letters, there is a secret marriage, a key to the library that seems to point the finger of suspicion at one of the suspects. Structurally this novel is quite close to the model of the golden age detective fiction of the 1920s and 1930s although the tone is much more Victorian. Mr Raymond does not believe that either of the Misses Leavenworth could be guilty - such refined ladies did not do such things. Mr Gryce on the other hand has no such illusions about the fairer sex.

The rather leisurely pacing and the at times histrionic tone points to the novel’s affinities with the sensation novels of Victorian authors like Sheridan le Fanu, Wilkie Collins and Mary E. Braddon. The novel is rather too long, although modern readers accustomed to the long-winded crime fiction of our own age will probably not find this to be too much of a problem. They might find the somewhat melodramatic tone harder to forgive. Personally I like 19th century novels and I had no real problems with those aspects of the book.

The plotting has the kind of ingenuity that will appeal to readers with a liking for the puzzle-solving style of crime fiction.

The Leavenworth Case was in its day a major bestseller, racking up sales of 750,000 copies within a few years, a very impressive figure for that period. Green’s detective novels were also quite influential, inspiring a certain Agatha Christie to take up crime writing.

Worth reading for its historical importance, and it’s fairly entertaining as well.
Posted by dfordoom at 2:08 AM