The Crime at Black Dudley 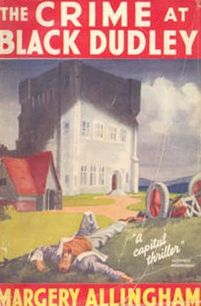 The Crime at Black Dudley is one of Margery Allingham’s very early works and it’s the book that introduced Albert Campion, a character destined to become one of the most popular of fictional detectives. But this book is not at all what you would expect from an Albert Campion mystery.

George Abbershaw is a doctor who does a lot of work for Scotland Yard; he is an expert on determining the cause of death in criminal cases. He is invited to a house party at Black Dudley, a rather gloomy and extremely old country house that had once been a monastery.   One of the guests is a mysterious young man named Albert Campion whom nobody can recall inviting. And of course a murder occurs. So far it sounds like the set-up for a very typical golden age detective novel but it will soon become very strange indeed.

The guests at Black Dudley will find themselves prisoners of a very well-organised gang run by a diabolical criminal mastermind. He wants something that one of the guests has stolen from him. Before this happens though a murder is committed during a performance of the Black Dudley Dagger Ritual, a tradition dating back several centuries.

It’s difficult to say just how seriously Allingham intended this novel to be taken. At times it seems to be spoofing the detective genre while at other times it seems more like a spoof of the thrillers that were so popular in the 20s, such as the Bulldog Drummond books and Edgar Wallace’s thrillers.

The plot is outlandish and is never quite convincing. Allingham’s inexperience as a writer at this stage of her career is very evident.

Campion is a fairly minor player in this novel. Allingham intended George Abbershaw to be the hero not just of this novel but of her future forays into the crime genre but readers seemed to be much more interested in Campion. Her American publisher suggested that Campion would be a better choice as the hero of her future novels. She accepted his advice, and very sound advice it turned out to be.

Campion at this stage is not yet a fully developed character but he’s already an interesting one, an apparently foolish young man who turns out to be very cool in a crisis. He’s a very ambiguous character and we’re never quite concern if he’s destined to be a hero or a villain. In this novel he is in fact destined for neither role.

As a novel it’s a bit of a train wreck. Allingham was clearly unsure whether she wanted to write a thriller or a detective story. Structurally though it’s quite interesting with the murder being essentially a sub-plot. Despite its weaknesses it’s an interesting failure and not without entertainment value.
Posted by dfordoom at 4:19 AM