The Complete Adventures of Romney Pringle 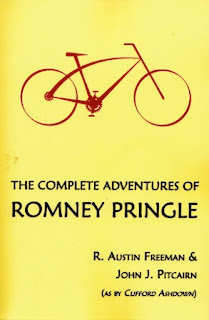 These stories were published in 1902 and 1903 under the pseudonym Clifford Ashdown. Freeman seems to have later disowned these tales, perhaps because they are very different in style from his later work.

Romney Pringle is a thoroughgoing scoundrel. He claims to run a literary agency although it is a literary agency without any clients. Pringle is a kind of amateur detective but his real objective is to gather interesting items of information that he can turn to his own profit. He has no interest in solving crimes - his sole objective is to find ways of enriching himself.
He has a knack for being in the right place at the right time and for spotting opportunities.

He is a confidence trickster and a thief. But he is no common burglar. Mostly he steals from people who are in no position to go to the police, either because they are thieves themselves or because the involvement of the police would put them in an embarrassing situation. That’s Pringle’s real genius - there is usually very little real risk in his underhanded schemes.

The fact that Pringle so often finds himself in a position to uncover opportunities for illicit gain does sometimes stretch credibility a little but these stories are pure fun and such plot contrivances are easily forgiven. And really it’s no more far-fetched than the various fictional amateur detectives who always seem to find themselves on the spot whenever a murder is about to be committed.

In the various adventures recounted in this volume Pringle will uncover buried treasure, he will unmask a patent medicine racket and then turn it to his own advantage, he will discover daring thefts and manage to ensure that the proceeds end up in his own hands, he will indulge in some clever stock market manipulation and in short engage in many and varied acts of ingenious villainy.

It goes without saying that Mr Pringle is also a master of the art of disguise.

Freeman later became famous for his plotting and while these tales are less complex than his later works there are already signs of his skills in that area.

The late Victorian and Edwardian period was the first golden age of detective fiction but it was equally a golden age for gentleman thieves. Arthur Morrison’s stories of a crooked private detective collected in The Dorrington Deed Box and Hornung’s tales of the gentleman burglar Raffles were roughly contemporaneous with the Romney Pringle stories, and Maurice Leblanc’s tales of that other great gentleman thief Arsène Lupin would soon follow. Charming villains were almost as popular as brilliant detectives.

The Romney Pringle stories are a fine example of this curious crime fiction sub-genre and Romney Pringle is a fascinating gentleman rogue. Recommended.
Posted by dfordoom at 6:00 AM