The Big Book of Adventure Stories 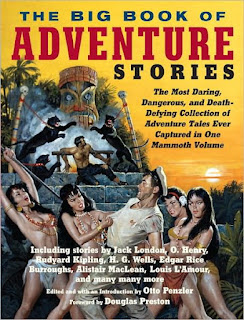 The Big Book of Adventure Stories from Vintage Press, edited by Otto Penzler,   gathers together almost fifty adventure tales most of which originally appeared in pulp magazines at some stage during the first half of the 20th century.

Penzler’s definition of adventure is pretty loose, encompassing everything from spy fiction to tales of the South Seas to westerns to science fiction.

There are plenty of well-known masters of adventure fiction here - Edgar Rice Burroughs. Talbot Mundy, Harold Lamb, H. C. McNeile (“Sapper”), P. C. Wren, Robert E. Howard, Jack London, Rider Haggard, Sax Rohmer, Edgar Wallace, Rudyard Kipling and Rafael Sabatini. And there are many lesser-known names as well (who contribute some of the best stories). And some surprising names as well - you don’t normally think of Cornell Woolrich as an adventure writer but he’s here and his contribution is a genuine tale of adventure.

Most of the famous heroes of adventure fiction will be found here as well - Tarzan, Zorro, Allan Quaterman, Richard Hannay, Bulldog Drummond, the Scarlet Pimpernel, Conan the Barbarian, Buck Rogers, even Hopalong Cassidy. It’s intriguing to read early stories of some of these heroes - who knew that the Cisco Kid started out as a bad guy?

In a collection as large as this there are bound to be a few misfires. Jack London’s contribution is very dull. But on the whole the quality is fairy consistently high.

Some of these stories are very well-known - Kipling’s The Man Who Would Be King, Richard Connell’s The Most Dangerous Game. But mostly Penzler has chosen lesser-known works, or stories that were once widely read but are now more or less forgotten (such as Armageddon 2419 A.D. which introduced the character of Buck Rogers). Or Leiningen versus the Ants, which was the literary source for one of my favourite cinematic guilty pleasures, The Naked Jungle. You couldn’t leave John Buchan out of an anthology like this but Penzler has unearthed a very uncharacteristic Richard Hannay story set in Africa.

With so many stories to choose from it’s nearly impossible to pick favourites. Stories which came as a pleasant surprise were Theodore Roscoe’s Snake-Head (an interesting take of the legend of Medusa), The Girl in the Golden Atom (a strange but ingenious science fiction story) and Georges Surdez’s Suicide Patrol, a crime thriller set within the French Foreign Legion. Sax Rohmer’s The Hand of the Mandarin Quong is also particularly good, but that’s no surprise since Rohmer was always good.

There’s a tremendous amount of fun to be had here and the wideness of the scope proves to be an advantage, tempting the reader to delve into hitherto unexplored areas of pulp fiction.

For lovers of pulp fiction and stirring tales of adventure this has to be a must-buy.
Posted by dfordoom at 11:38 PM