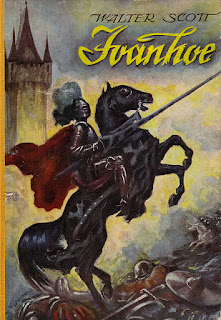 Sir Walter Scott’s influence on the development of both historical fiction and adventure fiction is second to none. He more or less invented both genres as we know them today.

His popularity remained enormous for at least a century after his death in 1832. He fell out of favour in the latter part of the 20th century and although he’s still reasonably well-known he is little read today.

His early novels dealt exclusively with Scottish history but Ivanhoe, published in 1819, marked a change in direction. With this novel Scott turned his attentions to both English history and to the Middle Ages. The 19th century obsession with all things medieval was largely due to Sir Walter Scott.

Ivanhoe has not one hero but three - the Saxon knight Wilfred of Ivanhoe, Robin Hood and King Richard I. Despite the book’s title Wilfred of Ivanhoe actually plays a subsidiary role for most of the novel. It has a selection of colourful villains and some memorable minor characters. And it has two heroines, one of whom is a Jewess (a rather bold innovation for 1819).

Wilfred has been disinherited by his father Cedric. Cedric is the unofficial leader of Saxon resistance to England’s Norman overlords. He has never resigned himself to the idea of serving a Norman king although he has a considerable personal esteem for Richard Couer-de-Lion. Richard is at this stage believed to be in captivity somewhere on the Continent and Prince John effectively rules in his stead. John has ambitions to claim the throne for himself.

A tournament held by Prince John first brings Wilfred to public attention as he overthrows the greatest knights in the land. He is however grievously wounded. He finds himself in the care of Rebecca, the daughter of the wealthy Jewish moneylender Isaac of York. Both Rebecca and Isaac will play significant roles in the novel. While taking Wilfred to a place of safety where he can recuperate they are ambushed by brigands in the woods. This incident will introduce us to another major character, Robin Hood. It will also bring Brian de Bois-Guilbert to centre stage. Bois-Guilbert belongs to the order of Knights Templar. This order has become not just wealthy and powerful as the result of the wars in the Holy Land (in which Richard Couer-de-Lion played a major role). The Templars have also become corrupt, debauched and power-hungry.

The tournament also introduced the mysterious Black Knight, also destined to be a major character.

Bois-Guilbert’s obsession with Rebecca (the Templars are inclined to take their vows of chastity very lightly) will set in train a series of events that will involve all the major characters.

Wilfred of Ivanhoe himself is not merely a minor character for most of the book, he is also a dull and colourless hero. Fortunately the book’s other heroes - the Black Knight, Richard the Lionheart and Robin Hood - are far more interesting.

Even more interesting are the villains. Brian de Bois-Guilbert is a fascinating character, a complex villain for whom we will eventually feel a grudging respect. He might be a bad man but he is not a little man. His faults are on the grand scale. His courage is unquestionable and he will discover, much to his own surprise, that he has a conscience.

Prince John is equally fascinating - a mixture of boldness and timidity, and of courage and cowardice, a weak indecisive man with one particularly telling flaw - he does not know how to make himself popular.

Richard the Lionheart is also a complex hero - bold and courageous to the point of folly, irresponsible but generous. He is a good man but a poor king, but unlike John he knows how to make himself loved.

Scott’s treatment of his two important Jewish characters is surprisingly (for the early 19th century) quite sympathetic. Isaac is greedy but the circumstances of the Jews makes his greed not just understandable but in fact a necessity for survival. Rebecca is brave and intelligent.

The novel’s other heroine, Cedric’s ward Rowena, is strong-willed to the point of obstinancy.

Mention must be made also of a colourful gallery of minor characters - the jester Wamba (son of Witless), the serf Gurth who becomes Wilfred’s squire, Friar Tuck, the villainous knight Front-Boeuf.

Ivanhoe stands up rather well today. It has complex characters, it’s well-paced and there’s enough suspense and excitement to satisfy any fan of adventure fiction. Scott is where the genre started and he’s still very much worth reading. Recommended.
Posted by dfordoom at 1:55 AM