In the Grip of the Minotaur 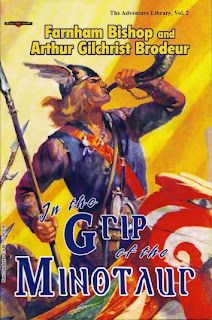 In the Grip of the Minotaur, a novel by Farnham Bishop and Arthur Gilchrist Brodeur, was serialised in Adventure magazine in 1916. It might play a bit fast and loose with history but it’s undeniably entertaining.

The Minoan civilisation, centred on the island of Crete, dominated the Mediterranean for 1500 years until it collapsed somewhere around 1500 BC (give or take a few centuries). This civilisation was virtually forgotten until Sir Arthur Evans excavated the palaces at Knossos and Phaestos at the beginning of the 20th century. Since the earlier forms of Minoan writing have never been deciphered it remains a shadowy civilisation and the reasons for its collapse remain obscure. It may have been all but destroyed by an immense volcanic eruption on the island of Thera.

The obscurity of this civilisation and the mystery over its end have given rise to various speculations, one of the more popular being that it was actually the inspiration for the legends of the lost land of Atlantis.

In 1916 it was very big news indeed in the world of archaeology.

Farnham Bishop and Arthur Gilchrist Brodeur came up with their own ingenious explanation for the destruction of the Minoan civilisation - it was destroyed by ancestors of the Vikings! Historically this is a very dubious theory but it certainly makes for a gripping tale.

In the novel the Bronze Age ancestors of the Northmen were already hardy seafarers. Prince Ragnarr is a particularly bold adventurer and has taken his ship, the Grey Wolf, into  Mediterranean waters in search of trade. He has reached as far as Troy. Troy is a rising power but without a navy it is helpless against Minoan seapower and Troy’s king must pay tribute to the Minoan king, King Minos. At Troy Ragnarr is caught up in the power politics of the age and he finds love. He falls for the beautiful Trojan princess Ilia. Unfortunately he finds he has one woman too many in love with him. Rala, a street acrobat whom he rescued from robbers, is totally besotted by him as well. Rala is brave and resourceful and Ragnarr, although a fearsome warrior, is a rather kind-hearted soul and he and his men more or less adopt Rala.

Princess Ilia has another suitor - the Minoan prince Ambrogeos. The Trojans cannot afford to offend the Minoans so the weak-willed Trojan king offers his daughter’s hand to Ambrogeos. This naturally leads to trouble, Ambrogeos is badly wounded, and Ragnarr sets off for Crete vowing revenge against the Minoans. He also vows to kill the Minotaur, the fabulous half-man half-bull monster to whom the Minoans make human sacrifices.

In Crete Ragnarr will have more adventures and will find a very dangerous enemy indeed when Prince Ambrogeos returns. But before that, Ragnarr will find love. Yes, again. In those days no woman could resist a handsome brave barbarian. If he thought having two brave, intelligent and determined women loving him was difficult enough, now he has three. Any one of the three, even the lowly acrobat girl Rala, would make a worthy subject for the love of a handsome prince. But whichever he chooses he’s going to have two very unhappy women on his hands.

His third love is potentially the most dangerous - the beautiful Minoan Princess Ariadne. Ariadne is weary of the cruelties of Minoan Crete and anxious to go off adventuring with Ragnarr, but she’s inclined to be the jealous type.

Ragnarr’s romantic adventures will result in his having to flee Crete, but when he returns it will be with a great fleet of Northmen. The stage is set for a war to the death between two very different cultures. Ragnarr will penetrate the famous Labyrinth and find the Minotaur but the monster is not the kind of monster he has ever encountered before.

Bishop and Brodeur portray the Minoans as ultra-civilised in many ways, but decadent and cruel. The clash between such a culture and a virile freedom-loving barbarian culture was sure to find a ready audience in 1916.

The bull-leaping that plays such a prominent role in Minoan art plays an equally important part in the novel. No-one is absolutely sure what the significance of bull-leaping was although it was undoubtedly connected in some way with their religion. In reality it is by no means certain that bull-leaping was intended to have fatal consequences for either the human or animal participants. Bishop and Brodeur decided for the purposes of the novel that it was a kind of human sacrifice in which the sacrificial victims had a sporting chance - if they could leap over the bull’s horns successfully three times they could go free.

Ragnarr is fierce, ruthless and hot-tempered, but he is also brave and with a highly developed sense of honour. He is capable of great loyalty and even kindness. He fears no man, but where women are concerned he’s as helpless as a kitten. They keep throwing themselves at him and he’s too soft-hearted to hurt their feelings. He also manages to become involved with the sorts of women to whom it is very difficult to say no. Princesses do not take kindly to that.

There are epic battles on land and sea and the action is non-stop. This is pure pulp fiction and the pace is frenetic. That doesn’t leave much time for in-depth characterisation but Ragnarr and Ariadne in particular are colourful and memorable characters.

An exciting adventure tale, historically absurd but none the worse for that. Great pulpy fun and highly recommended.
Posted by dfordoom at 8:34 AM