The Haunter of the Ring and Other Stories 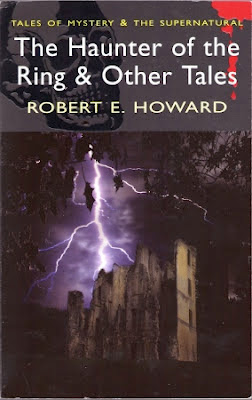 Robert E. Howard will always be best remembered for his sword and sorcery tales, especially the Conan stories, but his work was extraordinarily varied. He wrote westerns, adventure stories, gothic horror and even detective stories. The one thread that connects all his work however is horror. Even when he wrote detective stories he still added a dimension of the horrific.

Wordsworth’s paperback The Haunter of the Ring and Other Stories is an excellent sampler of his non-sword and sorcery output, with a very strong emphasis on the gothic and the macabre.

It includes his classic Pigeons from Hell. There are a couple of werewolf tales. There are three detective stories, remarkably dark and gruesome.

Many of the stories deal with reincarnation or with what appear to be memories of past lives, or perhaps dim collective memories stored in certain arcane objects or certain accursed places. They are stories of events so horrible or so cataclysmic that the echoes remain centuries later. The Children of the Night and The Black Stone are notable examples, the latter a truly superb story, as is The Cairn on the Headland.

Black Wind Blowing is another impressive tale of dark deeds that return to haunt the present.

Thee are quite a few tales that draw on Lovecraft’s Cthulhu Mythos, not surprising since Howard was an important member of Lovecraft’s circle. The best writers in Lovecraft’s circle had a remarkable ability to influence each other without merely copying each other. They had their own voices and were confident enough in their own abilities to absorb influences without being swamped by them. The Children of the Night and The Fire of Asshurbanipal both draw on Lovecraft’s Mythos but with a definite Robert E. Howard flavour. Howard’s style is more violent and there’s a disturbing eroticism you won’t find in Lovecraft.

Howard was fascinated by the ideas of cultures in collision, and especially by conflicts between cultures at different levels of development, or between cultures of differing levels of barbarism. This is something that drives many of his best tales and he had the ability to capture the feel of cultures with wildly different ways of looking at the world compared to our own.

There’s plenty of horror here. While there’s more violence than there is in Lovecraft Howard’s horror does resemble Lovecraft’s in the sense that it’s not the physical threat you really have to worry about - it’s the cosmic horror that brings madness and undermines the very foundations of reason.

This is a fine collection - highly recommended.
Posted by dfordoom at 6:32 AM