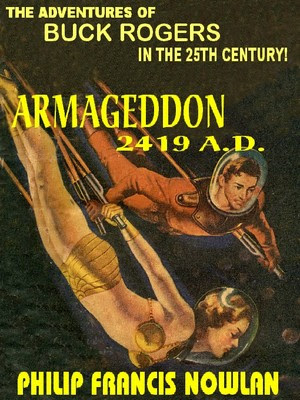 Philip Francis Nowlan’s novella Armageddon - 2419 A.D. appeared in the November 1928 issue of Amazing Stories and marked the first appearance in print of Buck Rogers, making it something of a pop culture landmark.

In this and in a sequel published not long afterwards he wasn’t yet called Buck Rogers. He was Anthony Rogers. The character acquired the nickname Buck when he made the transition to a comic strip in 1929.

If you’re only familiar with Buck Rogers through the 1939 movie serial (as I was) the novella will come as something of a surprise. The character is recognisably the same and the tone is very similar - very breathless and pulpy - but the background is very different.

In Armageddon - 2419 A.D. Rogers is a First World War veteran working for a company searching for radioactive gases in the late 1920s. He finds rather too much radioactive gas, in fact so much that it puts him into a state of suspended animation for 492 years. When he is revived he finds the world dramatically changed, but not in the way it was changed in the movie serial. China now rules the globe. The Chinese have destroyed their only serious remaining rival, the Soviet Union, and what was once the United States is now ruled by the Han Airlords. The powers that had dominated the world in the early 20th century had been disposed of after a series of lengthy wars.

But American civilisation has not vanished entirely. Their Han masters have such advanced machinery that they no longer have any need for slaves so they no more or less ignore the very small remaining American population which lives a scattered existence. The Americans have however been developing their own technologies. While the Han have airships powered by repeller rays and armed with disintegrator rays, the Americans have anti-gravity belts and rocket guns and advanced communications (by means of the
ether).

The Americans have developed an odd social system, a kind of blend of rugged pioneer individualism and informal collectivism but also bearing a strong resemblance to early 20th century US urban political machines. The leaders of the various American settlements are known as bosses and the settlements themselves are known as gangs.

The Americans have long-range plans to reconquer their country. These plans are accelerated when Rogers arrives among them from the distant past. Rogers has the type of 20th century military expertise that has been lost by the 25th century. He knows how to lay down a proper artillery barrage, and this proves to be a devastating advantage.

Rogers soon becomes a key figure in the American resistance. He also acquires a wife, the brave and resourceful Wilma, who proves to be a doughty fighter as well.

Armageddon - 2419 A.D. tells the story of Rogers’ first successful large-scale military campaigns, the first great American successes against the Han airships and a vicious war against traitorous American gangs. The ruthless violence of these wars is somewhat startling.

Thee is great entertainment to be had from the intricate descriptions of such technical marvels as the disintegrator rays, the anti-gravity belts and invisible and weightless metals! This is classic technobabble done with panache. Nowlan has a passion for lengthy and detailed info-dumps.

The literary style is pulpy in the extreme but enjoyably brisk.

It’s all outrageously ludicrous and outlandishly unlikely but it’s great fun.
Posted by dfordoom at 1:05 AM