The Daughter of Fantômas 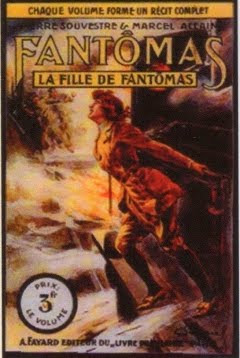 The Daughter of Fantômas was the eighth of Marcel Allain and Pierre Souvestre’s Fantômas novels, appearing in 1911. The first novel in the series, Fantômas, had appeared earlier that same year.

Fantômas is crucially important in the history of pulp fiction. He was one of the earliest diabolical criminal masterminds. Although not the first, Guy Boothby’s Dr Nikola predating him by nearly two decades. The Fantômas books had an immense influence on pulp fiction and crime fiction in Europe, an influence that has not yet entirely dissipated.

Most fictional master criminals have a nemesis, a figure who pursues them relentlessly with the aim of bringing them to justice. But one is not enough for Fantômas. He has two - the policeman Juve and the journalist Jérôme Fandor.

As this tale opens Fantômas has kidnapped Jérôme Fandor and shipped him off to South Africa in a crate. The journalist is lucky to escape with his life, a piece of good fortune he owes to an enigmatic young man named Teddy.

Fandor discovers strange things happening in South Africa. The immensely rich Has Elders has made his fortune from diamond mining. That doesn’t seem so strange, except that his mine is in a part of the country where diamonds have never been found, and where geologists would not expect them to be found. And while many people have seen the diamonds supposedly produced from this source, they are always cut stones. No-one has ever seen an uncut stone from this mine. Elders claims the stones are cut on-site but the equipment that is allegedly used for this process is quite unsuitable for cutting diamonds.

Teddy has a strange story as well. He has no idea who his parents were, but he knows the answer is found inside a mysterious skull. He has been instructed by the woman who raised him that the answer cannot be sought until he turns twenty-one, but now the skull has been stolen!

Fandor tends to attribute any dastardly goings-on to the notorious arch-criminal Fantômas. He has seen no sign of him, but Fantômas is a master of disguise so that doesn’t mean much. He is sure that Fantômas will eventually reveal himself. As the story unfolds we find that the brilliant ruthless master criminal has a surprising weakness. He has a daughter. He has not seen her for years but now he is determined to find her.

Even by the standards of pulp fiction the Fantômas books are very very pulpy. The plots are ludicrously unlikely and full of outrageous coincidences. The major plot twist in this one is obvious from about page three. That is to some extent the nature of pulp fiction but the Fantômas books are still rather clunky. Not altogether surprising perhaps, considering that Allain and Souvestre churned out no less than thirty-two Fantômas novels between 1911 and 1913! This is not exactly polished writing.

Mark Steele’s translation is slightly problematical. His prose is a bit on the stodgy side and rather awkward at times, but then the original French was probably not much better given the speed at which these books were written.

Whatever their flaws there’s no denying their central place in the evolution of pulp fiction. The French contribution to pulp fiction was immense and is under-appreciated in English-speaking countries.
Posted by dfordoom at 4:07 AM