Eric Ambler’s Epitaph for a Spy 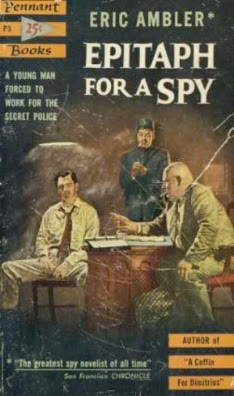 Eric Ambler’s 1938 novel Epitaph for a Spy is a perfect example of his distinctive approach to spy fiction. Ambler’s heroes were not professional spies but ordinary people caught up in the dangerous web of espionage. They do not thereby metamorphose into brave and noble heroes. They remain ordinary people, struggling desperately to survive, blundering through as best they can.

Josef Vadassy is a man without a nationality. Born in a part of Hungary that became part of Yugoslavia after the redrawing of national frontiers in the wake of the First World War, he had moved to Britain and then found himself unable to obtain either a valid Hungarian passport or a valid Yugoslavian passport. He was unable to obtain British citizenship either. Moving to France to take up a teaching position in Paris merely complicated his problem. The French authorities were willing to allow him to stay but made it clear that if he left the country they would not permit him to return.

Vadassy earns his living as a teacher of languages. It’s not such a bad life. The pay is not over-generous but he is content to live simply. He has his hobby. He is a keen photographer and has been able to save enough money to buy a rather fine (and rather expensive) Zeiss camera. He has also been able to save enough to take a holiday, in the French Mediterranean seaside town of St Gatien. The Hôtel de la Réserve is comfortable and the food is excellent.

Then misfortune strikes, through an unlucky accident. He had placed his camera on a chair and someone took it by mistake, leaving their own camera behind. An identical Zeiss Contax camera. He finds all this out when he puts a film in to be developed at the local pharmacy and is arrested. The film contains photographs of sensitive naval installations at Toulon. He is now accused of espionage. He’s a rather timid man but eventually persuades the man from the Sûreté that he is not a spy. He is not out of the woods yet though. Now he must play the spy himself, helping the Inspector to catch the real spy.

This real spy must be one of the guests. Vadassy, being a complete amateur, has only the haziest notions of how to go about finding a spy and not surprisingly he manages to suspect just about everyone and for all the wrong reasons. What he doesn’t know is that the Inspector from the Sûreté hasn’t been entirely truthful with him and the situation is not quite what he believes it to be.

Ambler’s approach to the spy novel is to concentrate on tension rather than action. If you expect sex and violence in your spy fiction you’ll be very disappointed. Ambler’s style is closer to Somerset Maugham’s (in his superb Ashenden, or the British Agent) - successful spycraft is more about knowing how to manipulate people rather than gunplay or fist fights. A talent for duplicity and a flexible approach to morality is more valuable than physical prowess. Sadly Josef Vadassy is essentially a fairly decent straightforward sort of chap and therefore not at all suited to espionage.

Ambler is also far more interested in the psychological dimension than in plotting. It doesn’t really matter who the real spy is, the focus is what happens to a very ordinary man when he suddenly finds himself in the nightmarish twilight world of espionage and counter-espionage. The important question is not so much whether Vadassy will find the spy but rather whether he can survive this ordeal, and preferably survive it without entirely abandoning his humanity or his own sense of morality.

The photographs of the naval installations are what Alfred Hitchcock used to call a McGuffin - they’re entirely unimportant in themselves and simply serve to drive the plot.

This is a slightly more cynical brand of spy fiction than the type of story that dominated the field in the first few decades of the 20th century, the type perfected by writers like John Buchan and Sapper. It’s not as extreme in its cynicism as the type of spy fiction that would emerge in the 1960s but it does mark a definite step in that direction.

Ambler’s books were significant also in marking a move away from noble and heroic figures like Bulldog Drummond and Richard Hannay. Ambler’s amateur spies simply muddle through to the best of their limited abilities.

While earlier fictional spies like Maugham’s sometimes dislike the things they have to do they still believe their work is necessary. Ambler and Graham Greene created a new type of spy fiction where the heroes no longer have that sort of certainty and often don’t even really understand what is going on. They are caught up in a web from which they cannot escape. Few writers ever mastered this type of story to the same extent as Eric Ambler.

A great book that entirely deserves its status as one of the classics of the genre.
Posted by dfordoom at 4:54 AM