The Footprints on the Ceiling, by Clayton Rawson 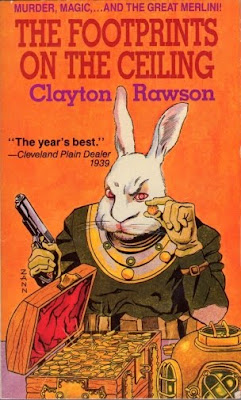 Someone recently recommended Clayton Rawson’s mysteries featuring the magician detective The Great Merlini. It turned out to be a great recommendation.

The Footprints on the Ceiling, published in 1939, was the second of only four Great Merlini novels written by Rawson. The combination of stage magic and murder is always a winner in my opinion and this one is interesting in that the magic is not just there for background colour. Rawson’s idea was that the art of the illusionist is based largely on misdirection, and so is the fine art of murder (at least in the hands of a true artist of crime).

And the art of the detective consists in doing precisely the reverse - stripping away the layers of misdirection and focusing on the things the murderer is hoping the detective will be too distracted to notice. The Footprints on the Ceiling certainly makes extensive use of Rawson’s theory with ingenious evil-doers coming up with fiendish mechanisms to sow confusion in the minds of an investigator. But The Great Merlini is a master of this very art of misdirection and no-one is better qualifies to clear away the fog of bogus clues.

Merlini and his pal Ross Harte are recruited by a leading psychic investigator, Colonel Watrous. The colonel is starting to have doubts about his pet medium, Madame Rappourt. A séance is to conducted at the home of the rather odd Skelton family. Their home is located on an island in New York’s East River. At the same time they can take the opportunity to investigate the family’s original house at the other end of the island, reputed to be haunted. An odd assortment of misfits has been assembled for the séance, but that’s not the only thing attracting them to the island. A British frigate sank in the East River during the Revolutionary War and the wreck is reputed to contain an immense hoard of English gold guineas with a current value of around $8 million. That wreck is believed to lie not far from the Skelton family’s island.

Apart from the $8 million lying on the bottom of the East River there’s also the matter of the Skelton fortune, currently controlled by the wildly eccentric Linda Skelton, and the question of the fate of that fortune were something untoward to happen to Linda. So with that sort of money at stake it’s not entirely surprising when the first murder occurs. But the first murder is a murder that appears to have been impossible, and then the telephone lines are cut and all the boats are sunk. This conveniently sets up the ideal situation for a murder mystery with a limited cast of possible suspects all marooned on the island until next morning.

This mystery will tax the powers even of The Great Merlini.

Aside from the intricate and ingenious plotting Rawson was having a good deal of fun with this story. There’s a good-natured tongue-in-cheek quality to this book with plenty of crime fiction in-jokes.

Rawson manages to weave pirates, sunken treasure, deap-sea diving, haunted houses, spiritualism, magic and murder into his plot. If that hasn’t sold you on the book then nothing will! Highly recommended.
Posted by dfordoom at 7:44 AM