The Werewolf of Paris, by Guy Endore 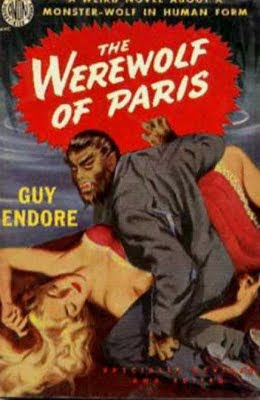 Guy Endore’s 1934 novel The Werewolf of Paris is perhaps best known as the basis for the rather delicious 1961 Hammer movie The Curse of the Werewolf. Yes, the one with Oliver Reed as the werewolf!

The novel is actually mainly concerned with lycanthropy as a metaphor for human viciousness, and especially for the horrors of war and revolution (much of the action takes place during the Franco-Prussian War of 1870 and the subsequent violence and civil war surrounding the establishment of the Paris Commune).

The book does come up with some intriguing ways of explaining the nature and origin of werewolves – theories involving multiple souls in a single body, and single souls in multiple bodies. There’s also quite a bit that had to be cut from the movie version. There’s incest, and there’s some serious priestly wickedness.

The werewolf of the title is Bertrand, and he’s the unfortunate victim of a kind of family curse going back to a particularly nasty medieval feud and the horrific punishment inflicted on a murderer. Bertrand is basically a nice young man, but he’s subject to overwhelming appetites whenever the change comes upon him. Born in an obscure village, he makes his way to Paris but his destiny is unescapable. He finds love of a kind, with a woman who has almost as many problems as he has. When war comes he discovers ample opportunities for the indulging of his tastes. He’s a monster, but he’s one of those tragic monsters.

Endore wisely avoids excessive sentimentality in the telling of his tale. It’s one of the more interesting werewolf novels that I’ve come across. Definitely worth checking out.
Posted by dfordoom at 5:24 AM