The Vampire Countess by Paul Féval 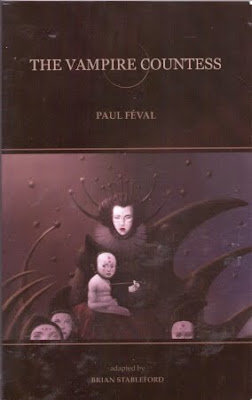 Paul Féval was a frighteningly prolific French author of roman-feuilletons, novels published in serial form which enjoyed enormous popularity in the 19th century. Most of Féval’s work could perhaps best be classified as crime melodrama but he dabbled in the gothic as well, with books like the amazingly strange The Vampire Countess, published around 1855.

Féval’s plots defy any attempts at providing brief synopses, partly because they’re so but mostly because he made them up as he went along so they tend towards incoherence. In a big way. But that’s part of their charm. Also part of their offbeat charm is the way the author mixes melodrama and comedy. I’m not sure the mix really works but the effect is odd enough to be fascinating.

There is a vampire countess in this tale. But whether she’s really a vampire or not is a moot point. As translator Brian Stableford points out in his afterword even when it appears that Féval has resolved the ambiguity about her true nature he hasn’t really resolved it at all. Stableford’s theory is that 19th century French writers felt uncomfortable writing about supernatural subjects if they didn’t actual believe in such things themselves.

This was true to a lesser extent of late 18th and early 19th century British gothic writers who also had a habit of writing apparently supernatural tales that turn out to have completely non-supernatural although still amazingly unlikely explanations. Féval preferred not to commit himself entirely either way. Although it may be an old-fashioned attitude it does give the book an oddly modern feel with its unresolved ambiguities.

The plot involving the vampire intersects with another plot involving royalist conspiracies to assassinate the First Consul, Napoleon Bonaparte (the book is set in the period before Bonaparte crowned himself emperor). There’s also a twisted kind of love story.

It was originally intended to be part of a series of novels dealing with bodies that end up in the Paris Morgue. Each story would relate the events that led to the person’s untimely demise. As a result one of the key characters is the superintendent of the Morgue who also moonlights as an amateur crime-fighter.

Stableford also makes the point that while most vampire stories use vampirism as a metaphor, this particular one is unusual in using it as a metaphor for a whole series of things - sexual, political and social.

It’s a ramshackle novel that still manages to remain entertaining. Féval’s concept of vampirism is quite different, and fascinatingly so, from that with which most modern readers have been familiar since Bram Stoker’s day.

Recommended for anyone who likes 19th century weird fiction with extra added weirdness.
Posted by dfordoom at 2:21 AM