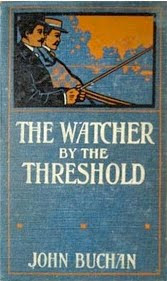 Buchan is an almost forgotten author who is well worth the effort of rediscovery.
Posted by dfordoom at 12:25 AM