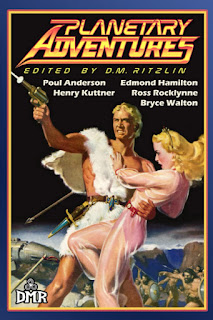 Planetary Adventures is another fine DMR Press sword and sorcery/sword-and-planet anthology. This one is devoted to sword-and-planet tales and that just happens to be a favourite genre of mine. It includes five longish short stories (I suppose they could be considered novelettes and one is closer to being a novella) from various pulp magazines. And they’re by a fairly distinguished selection of writers.

First up is Poul Anderson’s Temple of Earth which originally appeared in Rocket Stories in 1953.

Rikard has joined a band of rebels on the Moon. They are the sworn enemies of the burgeoning Coper Empire. The rebels do not want to be slaves, although curiously enough Rikard’s lady love Leda is more or less his slave-girl. The rebels have just made their last stand and Rikard and Leda have been captured.

Anderson displays his gift for clever economical world-building (which is evident in most of his stories in this genre). Like so many of the best sword-and-planet tales this is a story of civilisational decay. It is many many years into the future, human civilisation has survived only on the Moon but has sadly degenerated. Most of humanity’s hard-won scientific knowledge has been lost. Only a few pitiful remnants of technology survive.

Rikard and Leda are caught in the middle of a power struggle between those who wish to reclaim this lost knowledge and those who see it as being in their best interests to prevent this.

Edmond Hamilton’s World of the Dark Dwellers was published in Weird Tales in 1937.

This is a story of an ordinary man on Earth who discovers that he isn’t ordinary and he isn’t from Earth. And he has a destiny, to rescue his planet from tyranny.

There’s some effective creepiness, a fine villain and a clever plot resolution at the end. The hero’s planet has been in the hands of usurpers for generation. The usurpers rely on powers given to them by mysterious creatures they have never seen. No-one has seen the dark dwellers and lived to tell the tale.

Henry Kuttner’s The Eyes of Thar first saw the light of day in Planet Stories in 1944.

Mars, once home to a great civilisation, is now home only to barbarism. A warrior returns to seek vengeance for the death of his beloved, but finds himself the hunted rather than the hunter. He escapes when he finds a strange door, a door that leads him to a laboratory abandoned for a thousand years. He is greeted by a strangely familiar female voice.

It is a voice from another universe. A very very different universe. The woman whose voice he hears needs help. But no-one can travel between these two universes, not even to seek the owner of that uncannily familiar voice. In this tale Kuttner has created two fantastic worlds, one of them strange and the other very very strange indeed. An excellent bitter-sweet story with some genuine and effective weirdness. By a writer who deserves to be better remembered.

I also highly recommend Henry Kuttner’s Crypt-City of the Deathless One.

Ross Rocklynne’s The Empress of Mars appeared in Fantastic Adventures in 1939.

This is the only weak story in the collection. The hero has to rescue a princess and a magical necklace. The major plot twist is too obvious. This one doesn’t feel like a real sword-and-planet story. Lots of action though.

Bryce Walton’s Man of Two Worlds was published in Space Stories in 1952.

Earth’s Martian colony is all that is left of humanity and things are going very badly on Mars as well. Lee Thorsten and his lady love are among the Outcasts and they’re being hunted down. If captured they will be used in barbaric medical experiments. Thorsten has however found the secret chamber under the pyramid, the one his girlfriend remembered although she’d never seen it. She remembers a lot of things that she’s never seen.

This story mixes characters from mythology (like Theseus) with characters from pulp fiction (such as Conan). This would be par for the course today but was more unusual in 1952.

So five stories in this collection, and four of them are truly excellent. If you’re a sword-and-planet fan it’s pretty much a must-buy. Very highly recommended.
Posted by dfordoom at 1:16 PM