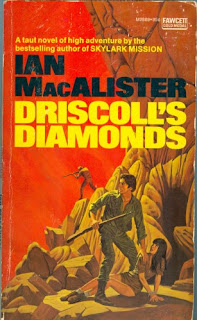 Driscoll’s Diamonds, published in 1973, was the second of the Ian MacAlister adventure thrillers.

Marvin Albert (1924-1996) was an American who wrote crime fiction, adventure fiction and westerns under a bewildering number of pseudonyms, including the four Ian MacAlister thrillers.

The choice of the Ian MacAlister pseudonym suggests that Albert was trying to present himself as the poor man’s Alistair MacLean (or perhaps the pseudonym was the publisher’s idea).

Driscoll’s Diamonds begins in Sharm el Sheikh in the southern Sinai. An Israeli patrol finds a man almost dead from heatstroke and dehydration. The man is John Driscoll and he’s identified by the Israeli authorities as an American mercenary. They don’t have a problem with him. He recovers and he finds himself an Israeli girlfriend named Shana in Jerusalem.

But Driscoll has something on his mind. Diamonds. He has a large cache of them. Or at least he knows where he hid that cache. The problem will be getting to the diamonds. He knows that that is going to be a problem because he knows that some of the people who have been looking for him have now found him. There are two groups of people looking for him. If one of those groups has found him it means trouble. If it’s the other group that has found him it means big big trouble.

A group of mercenaries led by a man named Royan had stolen the diamonds from smugglers on Lake Tanganyika. Royan had double-crossed the other members of the team. The only survivor was Driscoll and he got the diamonds, for a while. Until that plane crash in the Red Sea. Driscoll got out of the wrecked plane before it sank, but without the diamonds.

Now Royan has found Driscoll and he has found a way to force Driscoll to lead him to the diamonds. He is holding Shana as a hostage. Royan and four mercenaries, with Driscoll and Shana as very unwilling companions, set off for the Sudan to retrieve the diamonds. Royan has persuaded an Arab gem trader who knows the country to act as a guide.

They end up in the most inhospitable stretch of country on the planet, heavily infested with bandits and with Sudanese troops in hot pursuit. Driscoll will have to find a way to get the better of Royan and that won’t be easy. Driscoll is just about the most skilled mercenary around but there is one man who is better and than man is Royan. And Royan has his four henchman so the odds are five to one against Driscoll. If Driscoll can’t come up with some sort of plan he has no doubt that once the diamonds are found Royan will kill him and kill Shana.

What follows is lots of action, adventure, mayhem and nail-biting suspense. There’s no question that MacAlister is very very good when it comes to writing adventure thrillers. The action scenes are excellent, particularly in the ruined Crusader fortress and the climax near the beach at the end. Driscoll will have to act eventually but he’s going to have to be very very patient and the tension becomes almost unbearable.

Driscoll is a fine hero. He’s no Boy Scout. He’s been a mercenary, a gun-runner and a thief. There’s really only one honourable thing about him. He has genuinely fallen for Shana. He really does care for her, but does he care more about her or the diamonds? That’s something he’s not sure of himself. He’s also a realist. He knows that Royan is crazy but he also knows that as a fighting man Royan really does have the edge on him.

Royan is an effective villain. He’s ruthless and possibly insane and he’s haunted by his own personal demons. Both Driscoll and Royan are at least a little bit more than cardboard cut-out characters.

The violence isn’t particularly graphic. We’re dealing here with an author who doesn’t need to resort to graphic violence in order to make his story exciting.

MacAlister is also a writer (like Alistair MacLean) who knows how to use an incredibly hostile setting to the fullest advantage. As in MacLean’s best novels, if the bad guys don’t kill you the hostile environment probably will.