Dorothy B. Hughes’ In a Lonely Place 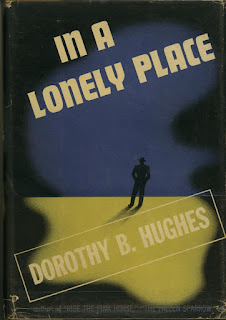 In a Lonely Place was one of the later and more highly praised of Dorothy B. Hughes’ crime novels. The 1950 film adaptation directed by Nicholas Ray has also been highly praised although it bears little resemblance to the novel.

Dorothy B. Hughes (1904-1993) was an American writer of crime fiction with a hardboiled and at times noir edge. She started writing crime novels in 1940 and her career petered out by the end of the 40s.

The novel is so different from the film that you needn’t think that anything I have to say about it will be a spoiler for the movie. They are entirely different stories. The only similarity is that some of the character names are the same. But they’re different characters and the events of the novel have no connection whatsoever with the events of the movie.

Now I should say upfront that this is the kind of crime novel that I usually avoid. It’s a serial killer story and I intensely dislike serial killer stories. It’s also one of those psychological crime novels that tries to put the reader into the mind of a killer, and that’s another kind of novel I generally avoid. They always strike me as being phoney and contrived as well as being somewhat distasteful. But having recently rewatched the movie and having heard that the book is so different my curiosity was piqued.

Dix Steele (who is a much younger man than the Dix Steele of the movie) was a flyer during the war. Now he’s living in LA on an allowance from his uncle while pretending to be a writer. He’s just run into an old wartime buddy, a guy named Brub. Brub is now a detective with the LAPD. Brub is working on the strangler case - a series of sex murders that has been terrorising the city.

We know right from the start that Dix is the strangler. He’s confident that he’s not going to be caught because he’s convinced that he’s an incredibly smart guy and that he knows no fear. Hanging around with a friend who’s a cop is a risk but it adds spice.

Things change for Dix when he meets Laurel Gray (who despite having the same name is not the same character depicted in the movie). He sees a chance for an actual relationship with a woman. The problem is that he doesn’t really understand Laurel and he gets entirely the wrong idea about what she wants from him. She’s attracted to him and she’s willing to share his bed but Dix starts thinking about stuff like marriage. It’s obvious that Dix is just not very good at reading women. He makes assumptions about them and then when they don’t measure up to his fantasies he gets resentful. Then he decides that they’re just whores. 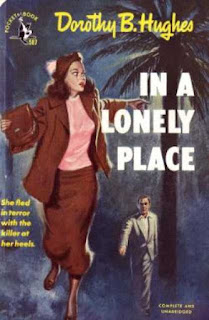 Dix himself has spent his whole life using people. In the movie he’s a once successful screenwriter whose career is on the skids but in the book he’s a loser right from the start. He thinks he’s a winner, or at least he thinks he’s entitled to be a winner, but making any real effort is too much trouble for him.

His real problems started during the war when he fell in love with a girl named Brucie. That ended badly. Really badly, as we’ll later discover.

The murders keep happening and Dix keeps thinking he’s two steps ahead of the cops.

The problem in this book is Dix’s motivation. This could be partly because Hughes didn’t think she could dare be open about the motivations of a sex killer. The word rape is used only once. It’s certainly implied the strangler rapes his victims before killing them. But the book is vague about the extent to which he is a sex killer. He seems to have other motivations as well.

It’s always a problem for a woman writer to try to get inside the head of a male character (just as it’s difficult for a male writer to get inside the head of a female character). The problem becomes more acute when the character’s motivations are emotional and sexual. It’s difficult enough to understand the sexuality of a normal member of the opposite sex but when it’s someone who is clearly not normal the problem becomes critical. I’m not convinced that Hughes carries it off successfully, but it is a fiendishly difficult thing to do.

On the whole it’s a moderately involving story but as I said at the outset this book belongs to a sub-genre that is not my cup of tea at all. Those who like psychological crime novels might enjoy this one a lot more than I did. I was a bit underwhelmed.
Posted by dfordoom at 10:05 AM