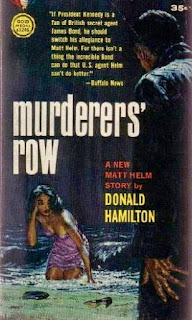 I’ve written at length in previous reviews about the huge differences in tone between Donald Hamilton’s Matt Helm spy novels and the Matt Helm movies, especially in my review of Death of a Citizen. Suffice to say that the Matt Helm novels are very very hardboiled stories about the most ruthless brutal fictional spy of his era. Murderers’ Row, published in 1962, was the fifth of the twenty-seven Matt Helm novels.

Matt works for a very secret US Government intelligence agency. They’re the US Government’s equivalent of Murder Incorporated. If the US Government feels that it would be more convenient to have somebody dead then this agency arranges the matter. Matt is their top operative. He is in effect a hitman. A hitman working for freedom and democracy. Those who work for this government agency refer to its headquarters as Murderers’ Row.

The Matt Helm novels have more in common with the 1960s British TV spy series Callan (about a British Government assassin) than with James Bond. Sure James Bond has a licence to kill but it’s understood that he only kills when it’s absolutely necessary. Matt Helm kills as a matter of routine. He may be the most cold-blooded of all fictional spies.

This time he has to take over a case from another of the agency’s operatives. They’re used to dirty jobs but this job is just too dirty. That’s OK by Matt. He doesn’t care how dirty the job gets. The agency is trying to make it appear that one of their top female operatives is willing to defect. They have to give her a plausible motive for wanting to defect. Matt’s job is to provide her with that motive, by giving her a savage beating. Matt doesn’t mind. If the agency tells him to beat a helpless woman to a pulp he does it. But it goes wrong. He wasn’t supposed to kill her. Now he has a corpse on his hands and there was a witness and the county police have him under lock and key. And he’s not allowed to reveal that he works for the government. It’s not an auspicious beginning for a case.

The witness, a cute young woman named Teddy, lies to the cops to get him off. He’s puzzled by this, and then disturbed by what she has in mind for him. His cover is that he’s a Mob hoodlum. Teddy wants to hire him to kill someone. Cute young women don’t usually want to hire hitmen. It’s something to do with her daddy. Which is interesting to Matt since the case that he’s so far made such a mess of has a lot to do with Teddy’s daddy.

Teddy’s daddy is a top American scientist. The bad guys have kidnapped him and they’re going to sell him to the Soviets. Matt’s orders are to make sure that doesn’t happen. He has to rescue the scientist if possible. If that’s not possible then he has to kill him. Sure, he’s an American scientist and he’s probably totally innocent and doesn’t want to defect but in the brutal world of the Matt Helm novels that doesn’t matter. The quickest easiest way to solve such problems is by killing. If innocent people get killed that’s too bad.

Maybe his cover is a bit too good since it seems that Teddy isn’t the only one who wants to hire his services as a hitman.

When Matt tries to kill somebody else and he doesn’t even know who the guy is Matt’s boss Mac starts to get worried that Matt is over-strained and is now just killing people at random. The same thought crosses Matt’s mind when he tries to kill another complete stranger. Mac thinks it would be a good idea to get Matt off this case but Matt is determined to see it through even though he doesn’t have a clear idea what he’s doing. He figures he’ll just stir things up and see who reacts, and how they react. He certainly manages to stir things up.

The latter part of the story including a decent action finale takes place on board an 80-foot ocean-going schooner. Matt assumes the schooner will lead him to the kidnapped scientist.

The violence in this novel isn’t graphic. It’s the casual acceptance of killing that is shocking. Matt kills one of his own people, an unarmed woman, a brave woman doing her duty, and he feels no regret and no remorse. These things just happen. He gave her a brutal beating and she died. All he feels is irritation. Her death is a nuisance. Matt never questions his own actions. I suspect this was a deliberate technique on the author’s part. He wanted to show that spies aren’t glamorous. They lie and cheat and steal and kill. The only real difference between Matt Helm and a Mob hitman is that a Mob hitman would probably take more care to avoid killing innocent bystanders.

As you may have gathered this novel is a million miles away from the world of the lighthearted campy Matt Helm movies.

Donald Hamilton may well be the greatest of all American writers of spy fiction. Murderers’ Row is highly recommended.

One thing I would mention is that if you’re going to venture into the world of the Matt Helm novels then the first novel, Death of a Citizen, provides essential backstory material which makes Matt’s motivations more comprehensible.