E. Howard Hunt's The Violent Ones 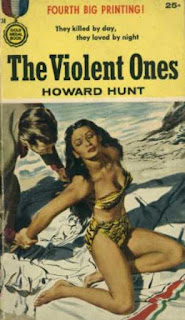 The Violent Ones is a 1950 thriller by E. Howard Hunt.

E. Howard Hunt (1918-2007) had what might be called an interesting life. He spent many years as a CIA agent, and quite a senior one. Hunt was one of the infamous Watergate “plumbers” and spent nearly three years in prison as a result. There are countless conspiracy theories (all entirely unproven) linking Hunt to all manner of alleged CIA operations such as the assassination of President Kennedy. The covert operations that he was definitely known to be involved in are colourful enough, including the Bay of Pigs fiasco. Hunt combined his career as a spy with a very successful career as a writer, a career that spanned nearly six decades. He published 73 books including hardboiled crime novels and spy thrillers.

And he was an extremely good writer. His hardboiled crime thriller House Dick is highly recommended and his spy thrillers are more than competent. I reviewed One of Our Agents Is Missing a while back and it’s pretty darned good. So Hunt is a writer you’re likely to pick up on account of his notoriety but you’ll go back to him because the guy really could write. He’s not quite in the top tier but in both the crime and spy genres he qualifies as a very good and very entertaining second-tier writer.

The Violent Ones can be described as a hardboiled thriller with definite spy fiction overtones.

Paul Cameron is an American who has just returned to France. He’d spent many years there, he speaks faultless French and he’d been mixed up in covert operations involving the Resistance. He’s gone back to France because he received a letter from from an old friend, Phil Thorne, an American diplomat who’s become involved in something he just can’t handle. He’s also gone back to France because he figures there’s nothing for him in America, not after serving a prison term for beating his wife’s lover to a pulp and leaving the guy in a wheelchair for the rest of his life.

In Paris he runs into Marcelle again. He’d known, and loved, her during the war but that was a long time ago and you can’t go back to the past. Or maybe you can. It might not be a good idea, but in his lifetime Cameron has done plenty of things that were probably not good ideas and he’ll undoubtedly do plenty more such things.

There’s also Mari, a Hungarian chanteuse. Getting mixed up with her would be a really bad idea so you know that that is exactly what he’s going to do.

He also has a corpse on his hands. Cameron had nothing to do with the murder but with his record that corpse could lead to misunderstandings with the French police.

And he finds that the past has a tendency to intrude on the present. A certain event took place during the war, involving a very large amount of gold. A variety of dangerous people now want that gold. Those people include communists, right-wing former Resistance fighters, the French Government and out-and-out crooks. Phil Thorne is also looking for that gold.

Hunt belongs to the school of thriller writes that holds that if you’re going to write a thriller you’re going to need lots of actions and lots of glamorous dangerous women. I have to say that I thoroughly approve of this formula. When Cameron isn’t getting beaten up he’s jumping into bed with an assortment of femmes fatales.

Hunt does have one odd stylistic tic. He often slips into second-person narration which is unsettling at first but you get used to it and in its own way it works.

The book has a classic spy/adventure thriller plot but it has a noir fiction atmosphere. And Cameron is more of a noir fiction protagonist than a conventional 1950-vintage thriller or spy fiction hero. He’s a man who’s made some bad decisions. Sometimes he made bad decisions because he just couldn’t see what else he could do. He is not however a mere loser. He has not given up on life although there are times when he’s come close to doing so. He’s no starry-eyed idealist but he’s not a complete cynic either. Fate has dealt him a bad hand but he’s going to try to play his cards as well as he can. He has no idea whether he has a chance of winning and the reader doesn’t know either.

There are three women in the story.Mari and Marcelle I’ve already mentioned but there’s also Renee du Casse, who owns the casino at Menton. All three seem to fit the femme fatale mould. There are also a number of men who, during the war, had some connection to that gold. There are three in particular, each of whom could be a villain, a hero or an innocent bystander.

As for the gold, the problem is to to find out where it is. Cameron has a few clues to work on, as does the reader.

The Violent Ones is relentlessly fast-paced and exciting. It’s a hardboiled noir-flavoured mystery thriller. It offers both sleaze and glamour. It has a pleasing hint of pulp trashiness. And it’s very politically incorrect. Oddly, given Hunt’s CIA background, it makes no attempt to bludgeon the reader with political messaging.
Hunt had no great literary aspirations but he understood both pulp fiction and noir fiction. It’s thoroughly enjoyable and highly recommended.
Armchair Fiction have paired this one with Frederick C. Davis’s High Heel Homicide (which is also pretty good) is one of their excellent two-novel paperback editions.
Posted by dfordoom at 10:06 AM