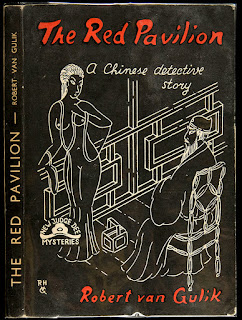 The Red Pavilion, published in 1961, is one of Robert van Gulik’s wonderful Judge Dee mysteries. It follows the usual pattern, with Judge Dee investigating three cases at the same time. And this novel includes a locked-room mystery!

The Red Pavilion opens with Judge Dee and his faithful reformed-criminal assistant Ma Joong passing through Paradise Island. Paradise Island is an entertainment resort. The entertainment comprises high-stakes gambling and high-class prostitutes. It’s all perfectly legal and while Judge Dee doesn’t personally approve he takes the sensible attitude that prostitution conducted in an orderly manner is overall a benefit to society.

There’s a festival going on and the only accommodation available is the Red Pavilion. It turns out to be most comfortable although the judge is puzzled by the fact that the interior doors haver locks on him. It is explained to him that those who rent the Red Pavilion value their privacy.

The judge encounters a young woman on his verandah. She’s hard to miss. She’s very beautiful and she’s wearing a robe so thin as to be almost transparent. At the moment the robe is wet so it’s entirely transparent and the judge notes that she is wearing nothing whatever underneath the robe. Dee is mildly annoyed until the young woman informs him that she is the current Queen Flower. The Queen Flower is selected from amongst the island’s most celebrated courtesans. It’s not jut an empty honour. It carries great social weight on an island devoted to pleasure. The reigning Queen Flower is not a person one should offend and Dee has great respect for the social conventions. After making sure that Dee has had a really good look at her near-naked body she departs but the judge notices that she seems nervous.

Dee intended to stay just one night on Paradise Island but his old friend Lo, the local magistrate, asks him to take over the investigation of a case of suicide. A young man named Lee, a newly appointed Academician, cut his throat over love for the courtesan Autumn Flower. Autumn Flower turns out to be none other than the Queen Flower Dee has already met. It’s a straightforward case. Young men kill themselves over women all the time. And Autumn Flower is an exceptionally beautiful woman well versed in the art of love so it’s not unreasonable to suppose that she could drive a man to madness and suicide. It all seems very straightforward until Dee makes a horrible discovery in the Red Pavilion. The discovery of this corpse raises serious doubts in Dee’s mind about the supposed suicide of Academician Lee. 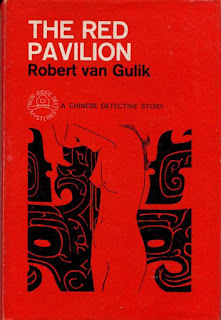 Dee is even more concerned to learn that there have in fact been three mysterious deaths in the Red Pavilion. All appeared to be suicides, but Dee now suspects that all three were cases of murder. Dee starts to wonder about a few other things as well, such as the rapid departure of an important local official.

Dee painstakingly constructs fairy satisfactory theories to account for all three deaths, but there’s always at least one clue for which the theories do not account. Those clues simply cannot be accounted for at all. That means that Dee’s theories must be partially, or even completely, wrong.

The three murders are all related in some way but are they directly related? Is there one killer or several? Dee is not sure. And this is a Robert van Gulik Judge Dee mystery, which means it is an attempt to conform party to the conventions of the classic western puzzle-plot mystery and partly to the conventions of Chinese detective stories. The reader cannot be entirely certain that assumptions about the solution based on the conventions of western mysteries will prove to be correct.

There are both physical clues and psychological clues in abundance. Autopsies conducted on two of the victims provide Dee with headaches because they reveal things he expected and things he didn’t expect. The Red Pavilion itself provides some important but deceptive clues.

With van Gulik you also get more than just a mystery. You get some fascinating glimpses into Chinese history, culture and jurisprudence (subjects on which van Gulik was extremely knowledgeable), an occasional aside on the subject of Chinese art (on which van Gulik was an acknowledged authority) and some reflections on love, sex and marriage (and van Gulik wrote an important scholarly work on that subject as well).

In this case you certainly get an intricate plot. There are three locked-room puzzles. Two are childishly simple. The third is much trickier. This book is not really a locked-room mystery in the sense of having a locked-room puzzle as the central element. It does however serve a vital plot purpose. The plotting is quite effective with an ending that probably won’t be at all the sort of ending you’re expecting.

As always Ma Joong provides some entertainment. He falls in love with a courtesan named Silver Fairy but that gets complicated as well. In this novel love and sex make life very complicated. More fun is provided by Crab and Shrimp, two oddly likeable strong-arm men employed by the island’s warden.

This is van Gulik at the top of his game - a good mystery but a novel that offers a bit more than a straightforward mystery. Very highly recommended.
You might also want to check out TomCat’s glowing review at Beneath the Stains of Time.
Posted by dfordoom at 8:15 PM