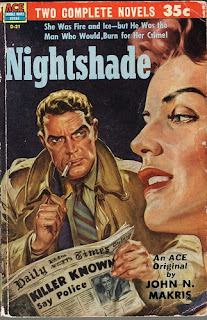 John N. Makris (1917-1975) was a former crime reporter and crime investigator who turned to writing for the pulps. Nightshade, published in 1953, was his only novel.

He’s looking for her on his own. He can’t ask the police for help because he and Sheila had a misunderstanding with the cops over the death of her husband Charley. Charley was shot to death and both Ken and Sheila were in the house at the time. Ken had been pretending to be Sheila’s brother, which was almost true (they’d been raised together). When the cops figure out that Ken is not Sheila’s brother and that Ken and Sheila were having an affair they draw the obvious conclusion - that they murdered Charley. But they didn’t. They were innocent.

At least Ken knows that he was innocent. He’s now starting to have his doubts about whether Sheila really was innocent.

In Tijuana Ken runs into an old pal named Jimmy (who has also had some misunderstandings with the police over forged cheques). Jimmy knows where Sheila is, and he tells Ken some other disturbing things about her.

There’s another murder and Ken once again finds himself facing a bum murder rap. He has to get out of Mexico fast.

Ken does find Sheila and finds that she’s been having an adventurous time. She’s acquired, and lost, another husband. She stands to inherit a huge fortune as a result but there may be a slight problem with the will. But Sheila had nothing to do with her second husband’s death. Nothing at all. She’s totally innocent. She swears it. And according to the death certificate the guy died of a heart attack.

So we have some typical noir fiction elements assembled here. Ken is your basic noir protagonist. He’s not a bad guy but his judgment isn’t too good and where Sheila is concerned it’s very bad indeed. His bad judgments have landed him in a whole world of pain. Sheila is your basic femme fatale. She wants money and she thinks only saps work for money. She might be a murderess or she might not be. She’s definitely trouble.

Sheila is not the only dangerous female Ken has to worry about. There’s also Irma. He’s not sure what Irma wants and he doesn’t think he can trust her but he sleeps with her anyway. Like I said, his judgment is not too good.

And then there’s Ann. He thinks he can trust Ann, but can she trust him? Ann hates Sheila because Sheila cost her half a million bucks. Irma hates Sheila as well.

Ken doesn’t know if he loves Sheila or if it’s just lust or if he hates her. It doesn’t really matter because they’re all emotions that cloud his judgment.

To make Ken’s life even more miserable the cops are slowly but surely closing in on him.

Whether a noir novel is true noir depends to a large extent on the ending and I’m not going to give you any hints about that. Nightshade certainly has plenty of noir mood.

And lots and lots of sexual tension.

There’s not a huge amount of overt violence although there is a slowly climbing body count.

Armchair Fiction have paired Nightshade with David Wright O’Brien’s Once Is Enough in one of their excellent double-novel editions.

Nightshade is a competent and enjoyable noir thriller. Recommended.
Posted by dfordoom at 6:36 AM