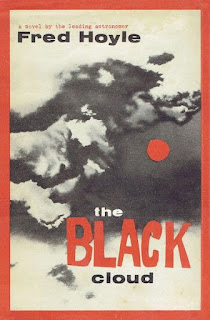 The Black Cloud was the first novel by the eminent British astrophysicist Sir Fred Hoyle. The Black Cloud sold well when it appeared in 1957 and was the beginning of his successful second career as a science fiction writer.

A young Norwegian scientist at Mount Palomar Observatory notices something odd on a series of photographic plates. It’s a cloud, presumably a gaseous cloud. That in itself is not surprising. Such cloud are common. What is surprising is how quickly it’s grown over the course of two weeks. This suggests that the cloud is moving towards our solar system, possibly quite rapidly.

At about the same time a British amateur astronomer also notices something odd - perturbations in the orbits of Jupiter and Saturn. Dr Christopher Kingsley makes some calculations based on the amateur astronomer’s findings and the results are startling. He immediately gets in touch with the Americans at Mount Palomar.

The cloud, for it is a gaseous cloud, turns out to be moving very rapidly indeed and directly for our solar system. Further calculations produce results that are not just startling but positively alarming. When it reaches us this cloud will completely block the sun’s rays, possibly for some weeks. The question is what effect this will have on life on Earth. Can such a disaster be survived?

A secret research establishment is established at Nortonstowe in England staffed by top American and British scientists, joined by a Russian astrophysicist and an Australian radio astronomer. Their job is to figure out exactly what is likely to happen and what can be done about it.

Much of the interest in the second third of the book involves political and moral dilemmas, with Kingsley taking what is at times a frightening dispassionate view of the realities of the situation. This is a science fiction impending apocalypse story that reminds me a lot, in its tone, of J.J. Connington’s 1923 classic Nordenholt’s Million which also deals with the possibility of very tough decisions having to be made for the sake of survival.

Things get even more interesting in the final third when Kingsley reaches some astounding conclusions as to the nature of the cloud. It may be intelligent. It may be alive. 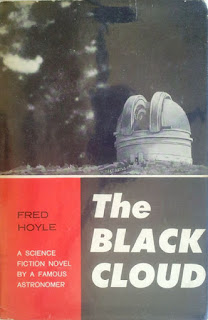 If it has intelligence it’s clearly going to be a very different kind of intelligence. This is one of those First Contact stories in which the question arises as to whether any kind of communication can be possible with something so alien. Will it even be possible to know if the cloud is hostile or benign? Does the cloud even recognise that it is dealing with intelligent life? Is the cloud’s survival compatible with human survival? Hoyle handles this aspect of his story extremely well.

The Black Cloud also raises all sorts of questions about the rôle of scientists, scientific ethics and the relationship between science and politics. It could be dangerous if the scientists at Nortonstowe gain too much power but it could also be dangerous if they have too little power. Hoyle handles this aspect of his story in an even more interesting and provocative manner. Hoyle is very cynical about politicians but he’s also somewhat sceptical of scientists who think they understand political and moral issues.

This is high-concept science fiction in the Arthur C. Clarke mould. Hoyle, like Clarke, has limited interest in characterisation although he is slightly more interested in the subject than Clarke. Dr Kingsley is a remarkably intelligent man with some astounding blind spots of which he is entirely unaware. The other characters are really little more than cardboard cut-outs. Which, in this type of science fiction, doesn’t matter at all.

The Black Cloud has some high drama and some genuine tension, it contains some intriguing scientific speculations (as a scientist Hoyle was a bit of a maverick) and some thematic complexity. This is excellent hard SF that doesn’t ignore the human factor. Highly recommended.

A few years after The Black Cloud Hoyle co-wrote the superb BBC science fiction series A for Andromeda, the novelisation of which I’ve reviewed here.