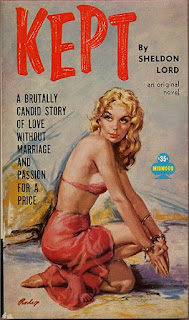 Kept is a 1960 sleaze novel by Sheldon Lord (a pseudonym used by Lawrence Block before he achieved fame and fortune as a crime writer).

One of the intriguing things about the sleaze fiction of the late 50s and early 60s was that quite a bit of it was written by people who actually write. People like Robert Silverberg, who went on to be one of America’s leading science fiction writers (and who is regarded as being somewhat towards the more literary end of the science fiction genre). People like Donald Westlake, who became a highly respected and very successful crime writer. And of course people like Lawrence Block. At a time when they were still aspiring young writers they had to find a way to keep body and soul together and writing sleaze fiction paperbacks was a more congenial way to do this than waiting tables. It was also a good way to learn discipline and economy as a writer.

They churned these sleaze paperbacks out very very quickly but it’s still evident that they’re the products of guys with genuine talent as writers.

Lawrence Block wrote many such books and has never been embarrassed by that fact.

Kept begins with Mark Taggert trying to thumb a lift. He’s a 28-year-old drifter. He doesn’t know why he’s heading to New York. When he gets there he’ll get a job for a while and then move on. That’s been the pattern of his life.

He’s done plenty of hitch-hiking and he knows it can take a while to get a lift. From long experience he knows the kinds of guys who give lifts to hitch-hiker. They’re always much the same. He is therefore rather surprised when a very pretty obviously very rich young woman in a Cadillac convertible gives him a ride. Very rich and very beautiful young women never give lifts to hitch-hikers, and no-one who drives a red Caddy convertible ever gives hitch-hikers lifts.

Her name is Elaine Rice. To pass the time while she drives (and he notices that she drives extremely well) they play a harmless game. He has to guess her life story. She’s slightly disturbed by the accuracy of his guesses.

They get to New York, to her very swank apartment, and she invites him in for a nightcap. They end in bed together and it’s fabulous for both of them. Mark figures it’s just a one night stand but Elaine has other ideas. She wants him to move in. She’s incredibly rich so she can pay all the bills. Mark is shock and appalled at the idea of becoming a kept man. There’s no way he’s going to become a gigolo for a rich woman. But he agrees to her scheme anyway.

Pretty soon Elaine is running his life for him. His life is actually going well because she knows what she’s doing. She turns him from a bum into a successful man about town. It’s not that she doesn’t want him to work. She understands that if he doesn’t get a job he’ll feel like a gigolo, so she gets a really good job for him. In fact he really is still a kept man. His financial contribution to their little household is minuscule and irrelevant. In practice she owns him.

What makes the story more interesting is that she’s not a calculating rich woman who makes a habit of keeping men. She’s crazy in love with Mark and she just can’t bear the thought of not having him with her all time, and she can’t bear the thought of not having him in her bed every night. But while she’s motivated partly by lust she really does care about him. It’s just that for Mark it’s like being kept as a pampered lap dog.

Mark’s job is so ridiculously easy that he he and his secretary Sarah have lots of free time. Sarah is twenty-one and gorgeous and the first thing he noticed about her was her spectacular breasts. And he just keeps noticing those luscious breasts. Mark’s love life is obviously about to get really complicated as he is torn between two women.

There’s plenty of sexual activity in this novel but it’s handled in a remarkably coy manner, even for 1960. When Mark and Elaine make love we’re told that they’ve made love and it was wonderful, and that’s as far as the descriptions of sex go. The sleaze quotient in this book is very very low.

getting more and more of a feeling that many of them are in fact romance fiction. They’re romance fiction in which people sleep together without being married and we’re told that sleeping together rather than having it hinted at. Which may have made them mildly risqué at the time. But many are pretty much romantic melodramas. I can’t help wondering if these books attracted a larger female readership than I’d previously assumed.

Kept is a novel I would definitely put in the steamy romance sub-genre of the romance fiction genre. It’s not even mildly pornographic. Not even close to it. It’s not even actually sleazy. The characters have plenty of sex but there’s nothing sleazy about. It’s wholesome healthy love-making

There are however a couple of elements that explain why a book such as this would have ben consigned to the sleaze category in 1960. It’s very honest about sex, and very honest about female sexuality. Elaine and Sarah are not femmes fatales or Bad Girls or scheming conniving spider women. They’re both genuinely very nice young women. And they’d both like to get married and have children one day. But in the meantime they do have sexual desires and they satisfy those sexual desires. At the time Elaine picked up Mark on the road she was divorced and had been sexless for quite a while and she really wanted a man to share her bed that night. Any man who was reasonably presentable and pleasant would have been fine. She just really needed sex, for all the complicated reasons women like to have sex including in this case pure physical need.

Sarah’s attitude to sex is similar. She wants to find the right man to marry, but until he comes along she’s quite happy to make do with uncomplicated sex as long as the man concerned is a nice guy. Elaine and sex both want True Love, but if they can’t have True Love then hot sex is better than nothing. They’re honest and straightforward about it but in 1960 a novel that was honest and straightforward about sex was going to be considered sleaze fiction, even though the sex in this book isn’t the slightest bit sleazy.

Kept is mostly just a story of the complications of love between a group of people who are actually pretty nice people who just happen to enjoy sex. It's a love story for grown-ups. And it’s a pretty well-written love story.
Posted by dfordoom at 10:58 AM