Into the Fourth Dimension by Ray Cummings 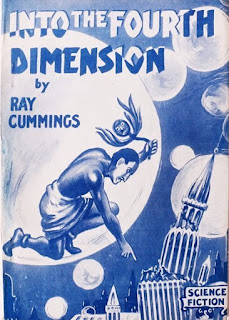 Into the Fourth Dimension is a 1926 short science fiction novel by Ray Cummings.

New York-born Ray Cummings (1887-1957) was one of the pioneering writers of American pulp science fiction. From 1914 to 1919 he had worked for Thomas Edison before turning to the writing of fiction. He is best known for his 1922 novel The Girl in the Golden Atom (expanded from a 1919 novella that had appeared in All-Story Weekly).

Into the Fourth Dimension begins with the appearance of the first of the ghosts in 1946, in Vermont. This is not just your usual report of a ghostly apparition. Hundreds of people see this strange ghostly figure. One of the eyewitnesses approaches closely enough to try to hit the ghost with a plank of wood (which has no effect at all on the ghost).

Soon ghosts start appearing all over the world.

The narrator is 26-year-old Rob Manse, one of the eyewitnesses to the first ghostly sighting.

Rob’s closest friends had been chemist Wilton Grant and Wilton’s sister Beatrice. After the sighting Wilton and his sister, for no apparent reason, refuse to see Rob until one day Wilton contacts him out of the blue. He tells Rob that Beatrice has been ill.

He has more to tell Rob. He and Beatrice have been working on some scientific theories involving time and space. They had come to the conclusion that there is another world, a different dimension of existence. They were not surprised by the appearance of the ghosts. It was what they expected. The ghosts are visors from another plane of existence.

And the ghosts are a threat. A terrifying threat.

Wilton has devised a method of travelling to that other plane of existence. Having successfully done so once he now must return and Beatrice and Rob must go with him. They must prevent the Earth from being invaded by another realm.

That other world is a very strange world. It is a world of pure thought. It is a world inhabited by beings that seem rather human but it turns out that this is misleading. They appear human because humans like Rob and Wilton can only interpret reality in human terms. It is human perceptions that make these beings seem like men and women. In reality they are very different.

Cummings indulges in some speculation about time and space and about the very meaning of existence. Writing in 1926, he has obviously been influenced by the revolutionary new theories in physics, Einstein’s theories and quantum mechanics. But he has also clearly been influenced by Freud’s ideas about the unconscious. And he has attempted to combine all these new theories of both physics and mind. Cummings is also obviously interested in the idea that the world as we understand it is a product of our own perceptions. Perhaps what we call reality is simply a product of our own perceptions. 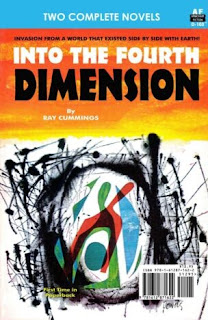 It’s really quite an ambitious and brain-bending little novel.

It’s also a kind of alien invasion story, with the aliens being thought creatures whose nature challenges human sanity.

There is plenty of action in the story, and at the same time there is no action at all. The action takes the form entirely of battles of the mind. They are epic battles in their own way, battles fought for the highest stake, but they do not take place in what we think of as the material realm.

Into the Fourth Dimension is highly imaginative thought-provoking stuff.

Cummings’ prose style is slightly odd. Even taking into account that it was written in 1926 it seems slightly archaic but this gives the book a certain flavour. And this book does have a distinctive flavour. This is after all science fiction from almost a century ago, when the conventions of the genre had not yet solidified. It was writers like Cummings who were creating the conventions of the genre.

While there is no space travel and no high technology Cummings has certainly created a very alien world indeed, much more alien that most of the worlds of outer space created by later science fiction writers.

Into the Fourth Dimension is a strange book but you have to admire the author for pushing boldly into unknown realms. Recommended.
Armchair Fiction have paired this one with Jack Williamson’s lost world sci-fi novel The Alien Intelligence in one of their excellent double-header paperback editions.
Posted by dfordoom at 12:32 AM