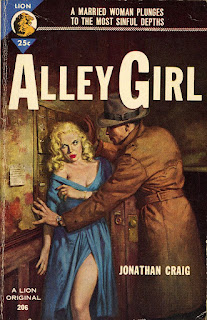 Alley Girl establishes its hardboiled credentials right from the start. Lieutenant Steve Lambert is a homicide cop and he’s a nasty piece of work. Steve has a very pretty 18-year-old girlfriend named Jean. You’d think that a guy with a hot 18-year-old girlfriend would go to sleep with the girl in his arms, but not Steve Lambert. Steve goes to sleep with a whiskey bottle cradled in his arms. Jean wouldn’t bother with Steve but the sex is really good, unless Steve is too drunk to manage it.

On this particular morning Steve has to get up early because he’s working on a big case. He has breakfast (a slug of whiskey followed by a beer) and then Sergeant Dave Kimberley picks him up. Steve despises Dave Kimberley as a Boy Scout while Dave is horrified by Steve’s brutal methods.

They’re working a murder case. A guy named Tommy Nolan is accused of killing a florist in a bungled robbery. Steve doesn’t understand why he isn’t allowed to just beat a confession out of Nolan. He doesn’t know if Nolan is guilty or not and he doesn’t care, he knows ways to get guys to confess to things even if they aren’t guilty.

Steve’s first call on this fine morning is at the apartment of Mrs Nolan, who turns out to be about twenty years old and drop-dead gorgeous. Steve explains to Mrs Nolan how things stand. Her husband is going to go to the electric chair for the murder, but there is a way she can save him. All she has to do is have sex with Steve and Steve will tell the D.A. that Nolan isn’t guilty. Since she doesn’t have much choice in the matter Mrs Nolan agrees.

As far as Steve is concerned the case is progressing nicely. He can keep forcing the beautiful young Mrs Nolan to have sex with him by holding out the promise of getting her husband off. At the same time a man name Edmonds has offered him a huge bribe to make sure Tommy Nolan goes to the chair. And there’s no way either Mrs Nolan or Edmonds can force him to keep his side of either agreement.

Of course there’s always that Boy Scout Dave Kimberley but Steve has no doubt he can handle that problem.

Just when you think the sleaze factor can’t get even more extreme the author throws a whole new sleaze angle in. There are so many characters who are sexually depraved or unhealthy, all of them in different ways. In this story sex is always dirty and dangerous.

In fact pretty much everything in the story is dirty and corrupt. Steve Lambert is a spectacularly vicious corrupt thug of a cop but nobody worries very much about his methods. It’s taken for granted that cops can do whatever they like. Steve is certainly one of the least sympathetic protagonists in noir fiction - there are more vicious and more violent protagonists but they have the excuse of being crazy. Steve is quite sane. He’s just a louse. He is however a memorable louse.

The characters who initially seem to be reasonably decent human beings turn out to be either morally corrupt or totally deranged. You can’t accuse the book of misogyny. The male characters and the female characters are equally twisted.

This was 1954 so you don’t get any graphic descriptions of sex or violence. It’s the squalid atmosphere and the terrifying amorality of the characters that provides the shock value. You feel vaguely unclean after reading this book.

It has to be said that it does have an impact. Jonathan Craig writes fine hardboiled prose. There’s a mystery which in 1954 most readers would not have seen coming although a modern reader might have an inkling of the solution.

Alley Girl is strong stuff but if you like tough sordid nihilistic crime stories then it’s highly recommended.
Posted by dfordoom at 6:44 PM