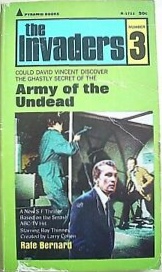 Rafe Bernard’s The Halo Highway (published in the US under the title Army of the Undead) is a 1967 TV tie-in novel based on the classic 1967-68 American science fiction television series The Invaders.

The Invaders was one of the best-ever alien invasion TV series. A young architect discovers that aliens are not planning to invade the Earth, they are already here among us. The paranoia level make the series a fascinating precursor to The X-Files.

The novel is not at all what you might expect, which is either a good thing or a bad thing depending on your point of view. It is at least an intriguing example of an alternative take on a classic TV series.

My full review can be found here at Cult TV Lounge.
Posted by dfordoom at 5:06 AM