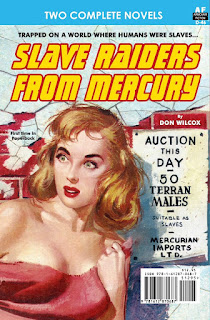 Don Wilcox’s Slave Raiders from Mercury was published in Amazing Stories in 1940. Cleo Eldon Wilcox (1905-2000) was an American science fiction author who wrote under a number of pseudonyms, most notably Don Wilcox.

Slave Raiders from Mercury opens in America in contemporary times. A carnival huckster has found an abandoned spaceship and has turned it into a major carnival attraction. Lester Allison (the hero of several other Wilcox stories) is a young man who meets a pretty girl named June at the carnival. People are queueing up to pay their fifty cents to sit inside the spaceship. Lester and June and a guy named Tyndall (who clams to be June’s boyfriend although she denies it) end up in the spaceship and then, much to everybody’s surprise, the spacecraft blasts off into outer space! And starts heading towards Mercury. What nobody knew was that it was an automated spacecraft controlled by slave traders on Mercury.

Mercury is inhabited by the Dazzalox, a degenerated dying race. They’re humanoid and mostly pretty similar to humans, apart from being very long-lived. The main interest of the Dazzalox is funerals - their own funerals. When you’re a thousand years old your funeral is something you look forward to. You have a great time, it’s a great status display, and then you go into a tunnel and you can look forward to a painless death. The Dazzalox may have been a great civilisation once but now they don’t even understand the technology that keeps their civilisation going. Apart from displays of status and owning slaves there’s not much else other than funerals that they’re interested in.

They don’t even need slaves. Everything is automated. Slaves are just a means of demonstrating status. The slaves are collected for them from Earth by a renegade Earthman named Kilhide. The slaves are all healthy young American males. Any slaves who aren’t healthy and young are painlessly disposed of.

It’s not that bad a life in some ways. Being a slave involves very little actual work.

Everything changes with June’s arrival. You see the Dazzalox have never seen a human female. They didn’t even know that human females existed. Now they know and they’re very excited. Mostly they’re excited by the novelty. Novelty is something they rarely get to experience. A human female is a major novelty and possession of such a novelty brings enormous status. The Dazzalox men are so excited that many are even prepared to cancel their own funerals. They all want to own a human female. They want Kilhide to bring them lots more Earth women.

Lester Allison and June have of course fallen hopelessly in love. And Lester Allison’s thoughts have now turned to rebellion. But that means facing the Floating Chop. It’s likely to lead to a blood-drenched finale.

The dying civilisation angle is intriguing and it’s handled fairly well. The Dazzalox are decadent but it’s an interesting kind of decadence, centred purely on status displays. It’s a kind of senile decadence. The Dazzalox can be cruel but it’s a child-like kind of cruelty. They’re scarcely even aware of it. They’re not stereotypically evil. They’re just massively self-centred and self-indulgent.

Kilhide is the real villain and he’s just selfish and greedy.

Lester Allison is your typical all-American hero but in a quiet unostentatious way. He has to become a hero by force of circumstances. Mostly he’s motivated by his love for June. Without her he would have accepted his slavery as the other slaves have accepted theirs.

This is pure pulp science fiction, totally lacking in any literary aspirations, but with a few interesting ideas. It’s moderately entertaining silly fun if you’re in the mood for extra pulpy 1940s science fiction.
Posted by dfordoom at 9:35 PM