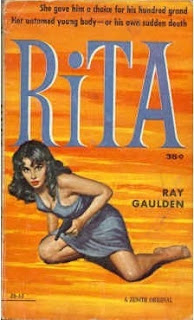 Ray Gaulden’s Rita is a 1959 noir novel with perhaps just a very slight hint of sleaze.

Rita begins with Joe Duncan, a man on the run. His real name is Harry Myers and he is a very bitter man. His partner not only cheated him but stole his wife as well. Harry got his revenge by cleaning out the safe at his partner’s casino in Reno. Harry has now changed his name to Joe Duncan and he’s headed somewhere he thinks will be safe. It’s a sleepy little Californian fishing town called Salmona which he remembers from childhood vacations. With the hundred grand in his suitcase Harry can make a new life there.

When he gets there he finds that Salmona has changed. It’s now a miserable brutal town dominated by the vicious Gale brothers - the corrupt police chief Ollie and his psychotically violent brother Brice.

Joe made the mistake of picking up a hitch-hiker on the road to Salmona. Rita Gale is a pretty 25-year-old but she turns out to be big trouble. On arrival Rita’s brother Brice Gale gives Joe a savage beating just for the hell of it. The worst part of it is that the Gales have a pretty shrewd idea that Joe is the guy who just skipped from Reno with $100,000 in stolen money. Joe knows that the Gales are not interested in arresting him - they just want that money.

Joe can’t trust either brother and he especially can’t trust Rita. But Rita is disturbingly seductive.

Maybe he can trust Dr Howard but the doctor and his wife have their own troubles. Doc Howard is the only man in the town not afraid of the Gales but the doctor is a sick old man.

Joe has managed to hide the money but he knows the Gales are not going to let him leave town and they’re not going to let up on him. They’d kill Joe to get that hundred grand. Joe has some stark choices. Maybe the least worst choice would be to trust Rita. That would be a dumb move, but whatever move he makes he’s probably going to lose.

Joe is your classic noir protagonist. He’s not really a bad guy but he’s made some stupid mistakes and he’s been naïve and now he’s trapped. Maybe Rita is trapped as well. Maybe there’s some decency in her, maybe she’s crazy and desperate to get out of the hellhole that Salmona has become or maybe she’s the femme fatal who will lure Joe to destruction. There are a lot of maybes and Joe is badly out of his depth.

Doc Howard is a good man but he’s twisted up inside having never recovered from he death of his first wife and he doesn’t think too clearly anymore. He wants to do the right thing but how much can a sick old man do? His second wife Fay is pretty twisted up as well, thinking she may have a mistake in marrying him.

Ollie and Brice on the other hand are pretty much simple villains. Ollie is fat and lazy but he’s greedy and corrupt. Brice is a time bomb about to go off, his violence spiralling more and more out of control. The Gales used to be rich but they’re not rich any longer and that’s made them a whole lot meaner.

Salmona is a nightmare town, a town of desperation and fear. The townspeople are being squeezed between a big combine that now controls the fishing industry and the viciousness of the Gales. Everybody knows that the town has become a hell on earth but nobody has the courage to do anything about it.

This is pure pulp stuff and it’s a little on the trashy side but it has plenty of pure noir atmosphere and plenty of noir desperation. It has characters who are trapped animals, wanting to escape but not knowing which way to run.

Rita is actually a fairly effective little noir potboiler. Highly recommended.
Posted by dfordoom at 7:13 AM