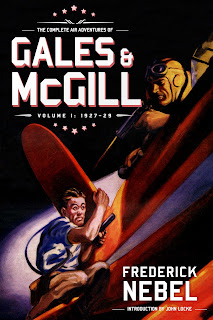 Frederick Nebel (1903-67) was an extremely prolific American writer for the pulps in the 20s and 30s and for the slick magazines in his later career. He was a notable contributor of hard-boiled stories to Black Mask. By the late 1920s Nebel was writing in a number of different genres - hardboiled crime, adventure stories set in the Canadian Northwest, adventure tales set in the Orient - and in 1927 he began a series of aviation adventure stories featuring two likeable rogues, Bill Gales and Mike McGill. Altus Press’s The Complete Air Adventures of Gales and McGill Volume 1 1927-29 collects the first twenty stories.

G Gales and McGill are aviators, adventurers and soldiers of fortune and they pop up just about everywhere in the coastal regions of East and South-East Asia - in Hongkong, in Singapore, in Saigon, in various parts of China. There is one story (Eagles of Ind) that takes them to British India and there is another story that takes them to Marseilles, Algeria and finally Morocco. Nebel had never actually been to any of these places and as a result they do come across in the stories as rather generic locations. There’s no real exotic atmosphere.

Aviation adventure stories enjoyed great popularity in the pulps in the interwar years. Some of the best writers of such tales (such as Donald Keyhoe) had been flyers themselves. Nebel was not. Nebel might not have been an expert in aviation matters but he did know how to tell an exciting story.

Gales and McGill will do a lot of things for money and are generally not troubled by concerns about the strict legality of the jobs they take on. They do however have definite moral standards. They are not cold-blooded killers. They have no compunction about fighting back if they are attacked, and they aren’t going to lose any sleep over killing in self-defence, but they won’t drop bombs on civilians or machine-gun civilians from the air. Since China was being torn by civil wars at this time and since Gales and McGill find themselves doing jobs for various Chinese warlord armies their moral qualms cause them some difficulties. The fact that they have taken on jobs for various factions is also perhaps one of the reasons that they are now not quite outlaws but are regarded with definite suspicion by the authorities throughout most of the Orient.

They seem to have particular problems with the French colonial authorities in Indo-China. While Gales and McGill do not always see humanity at its best and they have few illusions about human nature the only people for whom they seem to have a real dislike are the French.

Gales is the younger man and he’s the brains of the outfit. He can be daring and reckless but his risks are calculated risks. McGill is more impetuous. They’re a solid and loyal team. They are frequently broke and even more frequently drunk. They never met a brawl they didn’t like.

These are straightforward adventure stories without any supernatural or science fiction elements, and without any traces of weird fiction. Gales and McGill take on a variety of jobs, from transporting packages or carrying messages to carrying passengers, they rescue people who need rescuing, they carry out aerial reconnaissance missions for warlord armies. In some cases they are forced to take on jobs against their will - warlords can be rather insistent. They always seem to run into danger of some kind, even when they try really hard not to.

They’re good-natured rogues. They’re not exactly in the Robin Hood mould. They like to get paid for what they do. Sometimes they actually do get paid, sometimes not. They do tend to be suckers for ladies in distress, especially if the ladies are young are pretty.

Naturally there’s plenty of action and hair’s breadth escapes from certain death and doing rescues. More interestingly in many of the adventures our heroes also find themselves faced with perplexing technical challenges. In one story they have to find a caravan in the vicinity of the Khyber Pass, land and pick up a vital letter and then take off again and get the letter back to Peshawar and they only have hours in which to do it. The problem in this case is that there is absolutely no way of landing anywhere near the Khyber Pass. It’s not dangerous - it’s entirely impossible. But they still have to get that letter and get it back to Peshawar. Fortunately there’s virtually no limit to their ingenuity. This is the sort of stuff that endears these stories to me.