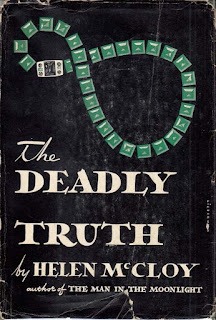 The Deadly Truth was the third of Helen McCloy’s mystery novels. It was first published in 1941. Helen McCloy (1904-1994) was an American writer who appears to be very highly thought of. I’ve had some very bad experiences with highly thought of crime writers so I approached McCloy with a considerable amount of trepidation.

There are some very worrying signs early on. First off the plot hinges around an imaginary truth serum (derived from scopalamine which is an actual drug sometimes used as a kind of truth serum). McCloy’s idea is that the new derivative is a perfect truth serum - if you take the drug you cannot avoid telling the whole truth. In fact of course no drug is ever going to perform in such a perfect completely predictable way. It’s just a plot device, and a rather silly one in my view.

Secondly, the detective hero is a psychiatrist (a Dr Basil Willing). Mercifully we don’t get a whole lot of silly Freudian psychobabble. We do get some silly psychobabble however.

The chemist who supposedly invents the miracle truth serum is Dr Roger Slater. He knew he was in for trouble when Claudia Bethune paid him a call in his laboratory. And sure enough Claudia steals his new truth serum. Now he’s going to have to go to the party she’s invited him to, and he dreads Claudia’s parties. Claudia’s idea of fun is to pick a person and then psychologically torture that person.

Claudia of course drops truth serum into her guests’ cocktails. She hears some truths she would have been better off not hearing, from her husband and his ex-wife. Also at the party is Peggy Titus (which is odd since she’s not the sort of moral degenerate usually to be found at Claudia’s parties) and Charles Rodney, general manager of the Renfrew Mills, the source of Claudia’s wealth. And of course Roger Slater. The party ends in extreme nastiness, like all of Claudia’s parties.

In the early hours of the following morning Dr Willing, who is staying at a beach house nearby, sees a light in the window of Claudia’s house and goes to investigate. He has almost walked in on a murder. The victim is not quite dead but expires within minutes.

Now we get to some of the odd things about this book. The police initially regard all of Claudia’s house guests as suspects as well as Dr Willing. In fact it is perfectly reasonable for them to suspect Dr Wiling. And then they suddenly lose interest in him as a suspect, for no reason whatsoever.

In fact the police seem to lose interest in the murder altogether. There doesn’t seem to be any actual investigation at all. Dr Willing is conducting his own personal investigation but the indifference of the police is never explained.

The reason for these odd things would appear to be that the author is not interested in the process of investigation. This is a detective story for people who like detective stories that have no detecting in them. The author is only really interested in the motives. Now there’s another odd thing. The suspects agree among themselves to pretend that none of them have motives. Later on they agree among themselves to pretend that all of them have motives. This makes no sense at all. There is no reason why suspects would want to do anything so strange. But the author thought it would be a cool idea. So what we get are characters who behave like characters in a bad detective story because that’s what the author wants them to do.

Finally at the very end McCloy decides some actual evidence is going to be needed. The crucial evidence could be said to be fairly clued except for the fact that the evidence is so outlandish that it really feels like it was pulled out of a hat.

By this stage you might be getting the idea that I didn’t like The Deadly Truth. You’d be right, but it’s only fair to point out that it does have some redeeming qualities. McCloy’s prose does sparkle occasionally and she can be witty and amusing. Unfortunately while such things can be a bonus in a well-plotted detective novel they are not enough on their own. And this is not a well-plotted detective novel. I’d give this one a miss.