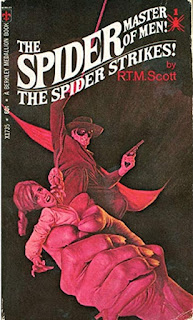 The Shadow having proved to be a successful hero for pulp magazine publishers Street and Smith it didn’t take long for their rivals Popular Publications to come up with a similar hero, The Spider. The Spider made his debut in The Spider Strikes! in 1933. At this time pulp magazines devoted to a single character were becoming all the rage. The Spider Strikes! was written by Canadian R.T.M. Scott (1882-1966) and was destined to be the first of the 118 Spider novel-length adventures. Scott also wrote the second Spider novel after which other writers took over (and the adventures would apparently get more outlandish).

The Spider is Richard Wentworth, a seemingly very wealthy young man with all the right social connections. His hobby, or rather his obsession, is fighting crime. In this first instalment he is on an ocean liner looking for a mysterious super-criminal. He takes time off from this hunt to deal with a card sharp who has ruined an otherwise decent man named Parsons who has a weakness for gambling. Wentworth has limited sympathy for Parsons but the man has a wife and family and is apparently kind to dogs. That’s reason enough for Wentworth to step in to retrieve Parsons’ losses. He does this by the simplest of methods - he murders the card sharp and retrieves the thousand dollars he won from Parsons. On the victim’s forehead he leaves a small red ink spider. This is the signature of the notorious Spider, for Richard Wentworth is none other than The Spider himself.

This is the latest of a series of murders carried out by The Spider, mostly in New York. Wentworth’s pal, New York Police Commissioner Kirkpatrick, has his suspicions that Wentworth might be The Spider. He has noted that The Spider only kills racketeers, thieves, ruffians and other types who need killing.

On arrival in New York Wentworth continues his search for the mysterious criminal mastermind. At the same time he has to watch out for the New York cops since The Spider is a wanted murderer.

Of course he encounters damsels in distress and femmes fatales and there is no way of telling which is which. Apart from his beloved Nita he has to assume that all women are dangerous. As for the master criminal he is hunting, Wentworth he has no idea what plans that individual has for the future. That he is planning a crime on the grand scale is certain, and it seems equally certain that the crime is likely to cause the deaths of a great many innocent people. The few clues that Wentworth has make that clear.

There are gunfights, fistfights, explosions, diabolical instruments of mass slaughter, kidnappings and fiendish cruelties. Naturally The Spider has to spend quite a bit of his time rescuing females from various decidedly unpleasant fates and naturally the chief villain of the piece attempts to strike at Wentworth through Nita. The body count is prodigious.

That chief villain is the one real weakness in the story. For much of the book he’s too shadowy and mysterious to be felt to be a real threat and the fact that we don’t know anything about his evil plot until very late in the story lessens his menace. The Spider really needs a more colourful and more flamboyant villain with whom to match wits.

The Spider Strikes! does an efficient job of introducing the regular characters and the basic setup. The Spider’s trademarks are the seal with which he leaves his spider mark on his victim’s corpses and his sartorial elegance - he invariably wears evening dress and an opera hat and carries a light cane which is actually a sword stick. The Spider’s garb would apparently become much more flamboyant in the later books. He also makes use of a super-powerful air pistol which is a deadly and silent killing machine.

Richard Wentworth AKA The Spider is assisted by his faithful and extremely useful Hindu manservant Ram Singh, and also by his girlfriend, the beautiful Nita Van Sloan (her faithful Great Dane Apollo also comes in handy).

The Spider is of course a vigilante killer but this first novel is careful to make his killings appear to be, technically at least, killings in self-defence. A vigilante killer hero was no problem but to present his slayings as cold-blooded premeditated murder might have been going a bit too far.

In the interwar years what might be termed righteous rogue heroes were immensely popular among both American and British readers. There were several such heroes featured in American pulps while in Britain reformed criminals like Blackshirt, The Baron and The Saint fulfilled a similar function. You might think the British versions would be less brutal but in fact The Saint could be every bit as ruthless as the most hardboiled American pulp hero, although his ruthlessness was perhaps rather less crude. The British righteous rogues were rather more polished and writers like Leslie Charteris were rather more sophisticated than R.T.M. Scott. The Spider does have some affinities with his British cousins though. Richard Wentworth is not merely a crime-fighting rogue, he is a gentleman rogue. He is not just rich but also decidedly upper-class. In fact much more upper class than The Saint. He is perhaps a much more violent version of John Creasey’s The Toff.

The Spider Strikes! is very very pulpy, extremely violent, fast-paced and generally enjoyable. The Spider himself has not yet established himself as a truly distinctive and colourful pulp hero but the fact that this novel was followed by 117 others suggests that that problem was probably later rectified. The Spider Strikes! is still fun and it’s recommended.
Posted by dfordoom at 8:13 AM