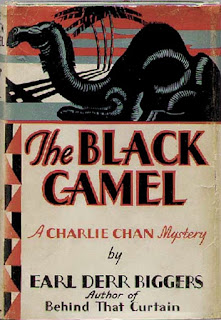 The Black Camel, published in 1929, was the fifth of the six Charlie Chan mysteries written by Earl Derr Biggers.

Movie star Shelah Fane’s career is fading rapidly but she either won’t or can’t see the writing on the wall. On her way to Hawaii to film some scenes for her latest movie she meets handsome (and very rich) Englishman Alan Jaynes. Since they’re both madly in love and her career is on the skids it would obviously be a very good idea to marry him. But Shelah will not take any important step without consulting fortune-teller Tarneverro.

Tarneverro has already had an encounter with Inspector Charlie Chan of the Honolulu Police Department who warned him, very politely, that fortune-telling is frowned upon by the authorities in Hawaii.

Shelah Fane has rented a luxury house in Honolulu and the party she throws there attracts lots of Hollywood types and some Hawaiian high society as well. And it ends in murder.

When Charlie Chan gets to the scene he finds that one of the few certain things about the crime is the time at which it occurred. But Inspector Chan will discover that nothing in this case can be taken for granted. Airtight alibis vanish like mist while new alibis spring up in their place. There are some very fine clues but they turn out to be treacherous. They may be false, or simply mean the opposite to what they appear to mean. There are suspects with apparently strong motives but the various likely motives for the murder may be mere illusions.

This is the most elaborately (and effectively) plotted of the four Chan novels I’ve read so far. Biggers uses misdirection with consummate skill - like a good stage magician he can successfully misdirect you even when you know he is doing it.

This is one of the two Chan novels set in Hawaii. Hawaii still has a certain glamour and exoticism but the Hawaii of the late 1920s is wildly exotic. We get to see both the glamorous and the squalid sides of Honolulu. Yes, even tropical paradises have their seedy underworlds.

And it’s Charlie Chan’s home and we get some interesting glimpses into Charlie’s interior world. One moment that I found to be rather affecting was Chan’s reflections on his vanishing heritage. He is profoundly saddened that his children are so thoroughly americanised and have no interest in their own culture or traditions. Chan can see his sense of identity slipping away from him. It’s not that he dislikes America. Not at all. He just wishes that his children could be Chinese as well as American.

In a good golden age puzzle-plot detective story you don’t want the characters (apart from the detective) to have too much depth. The plot is what such stories are all about and in-depth characterisation is a distraction and it slows things down. On the other hand you do want the characters to be more than just ciphers. If they have no personality at all then you’re not going to care who committed the murder or who gets charged with it. It’s a balancing act and Biggers does it pretty well here. The personalities are sketched with quick and broad brush-strokes but they’re vivid and colourful sketches.

There are occasional moments of sly wit. Charlie Chan takes his job very seriously but he does not lack a sense of humour.

There is a certain stylishness to this novel. I suspect that the Hawaiian setting inspired Biggers to really work on giving this story a distinctive flavour. There are some interesting little nuances that you don’t necessarily expect in a detective novel. Hawaii is an earthly paradise but it’s not good for everyone. It has a very bad effect on some people, a demoralising effect. For some people Hawaii is the end of the line.

There is just no way I could have failed to enjoy this book. I love theatrical/movie world murder mysteries. I love murder mysteries involving stage magic or phoney occultism and the Tarneverro character provides pleasing dashes of both these qualities. And I adore stories set in the tropics or in what we used to call (in less politically correct days) the Mysterious Orient. So this novel provides everything on my wish list. Plus it has a wonderfully constructed plot and we get a clearer understanding of what makes Charlie Chan tick. I’m not sure what else you could possibly ask for. Very highly recommended.

The 1931 20th Century-Fox adaptation of The Black Camel was arguably the best of all the Charlie Chan films.

You might also be interested to read my reviews of the earlier Chan novels The House Without a Key, The Chinese Parrot and Behind That Curtain.
Posted by dfordoom at 3:05 AM