Isaac Asimov’s The Caves of Steel 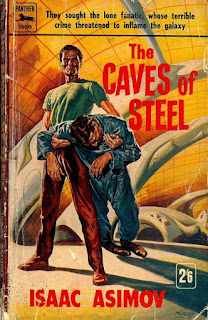 There have been some discussions on some of the vintage crime blogs that I frequent (such as The Invisible Event, Beneath the Stains of Time and also Ho-Ling’s blog) on the subject of mystery/science fiction crossovers. A title that always comes up in these discussions is Isaac Asimov’s The Caves of Steel. Although I used to consider myself to be a science fiction fan I’ve read very little of Asimov’s work. It seemed like a good time to check out The Caves of Steel.

In The Caves of Steel Asimov gets some of his predictions of the future spectacularly wrong, although in fairness to him he was no more spectacularly wrong than most other science fiction writers. In 1954 when this novel was published it seemed obvious that population growth would continue indefinitely at the extremely high levels of the preceding couple of centuries. The cities of the future would therefore be gigantic and horrifically overcrowded. It seemed just as obvious that we would face extreme shortages of just about everything, including food and water. In the Cities of Asimov’s future world the inhabitants would live on ghastly synthetic food that would be strictly rationed. Having your own bathroom would be a luxury that even very high status people could only dream about. People would live very much like battery hens. The possibility that overpopulation might simply not happen did not occur to Asimov in 1954.

On the other hand he did quite accurately predict a future in which the entire Earth has become a single bland monoculture and society has become a kind of soft totalitarianism in which anything other than absolute conformity is simply unthinkable. We’re well on the way to both of those futures. This is one of the elements that seems to get overlooked regarding this book - it is actually a rather subtle dystopian novel.

The Earth in this particular future had gone through a period of space colonisation but that was a very long time ago. The so-called Outer Worlds have long since achieved complete independence. In fact more than that, they have achieved military and political dominance over the Earth. There are fifty Outer Worlds but no new colonies have been established for centuries, if not millennia.

Robots are an accepted part of life in the Outer Worlds but not on Earth. On Earth they are regarded with suspicion and loathing. Now the Spacers (as the inhabitants of the Outer World are known) are trying to force Earth to embrace robots. Why they are doing this is one of the mysteries that has to be solved. 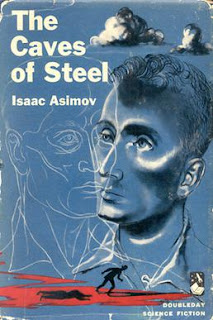 A Spacer has been murdered and it seems clear that he was murdered by a City Dweller (all of the inhabitants of Earth live in vast Cities are are known as City Dwellers). C-class policeman Elijah Baley, a human and a City Dweller, is assigned to investigate the murder. Much to his horror he is assigned a Spacer as his partner. But it’s worse than that - R. Daneel Olivaw is not just a Spacer but a robot.

Asimov was considered to be a major pioneer in dealing with the subject of robotics in science fiction. He was also generally regarded as being a writer of hard science fiction. What I find interesting about The Caves of Steel is that he appears to have no interest in the hard science fiction side of robotics. He doesn’t seem interested in the scientific and technological aspects. The positronic brain is kind of like a magical device. What Asimov is interested in is the social and psychological effects of a robotics revolution. What happens when robots start to take people’s jobs? What happens when people have to take orders from robots (Asimov’s famous Laws of Robotics notwithstanding there is no question that the robot cop in this novel expects humans to obey him without question). What happens when people start to realise they cannot compete with robots? How will robots make society worse, and how might they make things better? Most importantly, how will people feel about robots?

I must say I’m rather intrigued by this whole Laws of Robotics thing of Asimov’s. The First Law says that a robot cannot injure a human being and the Second Law says that a robot must obey orders from humans. But one of the protagonists of The Caves of Steel is a robot cop and he immediately takes actions that appear to break all three of the Laws of Robotics. How is Asimov going to get out of the corner he seems to have painted himself into?

I’m quite impressed by the discipline of Asimov’s writing. He has a story to tell and anything that does not contribute to the story is ruthlessly eliminated. How were the Outer Worlds settled? Did humanity invent some kind of faster-than-light drive? How do the Spacers who live in Spacetown on the outskirts of New York communicate with their compatriots on the Outer Worlds? What kinds of technologies do the Spacers have that allow them to dominate Earth? How and why, and when, were the positronic brains that make the robots possible developed? How does a positronic brain work? For any science fiction author the temptation to include lengthy infodumps explaining these things would have been overwhelming but for the purposes of the story we do not need to know these things so Asimov tells us nothing about any of these questions. He tells us what we need to know, no more and no less. I rather admire that.

It’s a dystopian novel but it doesn’t see this dystopian future as inescapable. Whether you will actually accept Asimov’s hopeful alternative as wildly impractical or totally plausible is a matter for your judgment. What is interesting is that Asimov doesn’t just offer an alternative - he explores the psychological underpinnings of his alternative, and he accepts that it can only work if people can be persuaded to want it to work.

How does it stand up as a mystery novel? Remarkably well actually. There are lots of red herrings and false leads and before he discovers the real solution Elijah Baley comes up with several very ingenious solutions that turn out to be completely wrong. There are plenty of clues provided and the clever thing is that they’re effective mystery novel clues but they also relate to the science fictional themes of the novel. And most importantly Asimov does not cheat. He explains how his future society works, he explains how the people of this society behave and he explains how his robots behave, and having laid down the ground rules he sticks to them. Which doesn’t stop him from pulling off some very effective misdirection.

So this is a novel that deals with interesting science fiction themes with surprising subtlety and it’s a novel that works very satisfyingly as a detective story. It’s an unqualified double success. Highly recommended.
Posted by dfordoom at 3:20 AM