The Finding of Lot's Wife by Alfred Clark 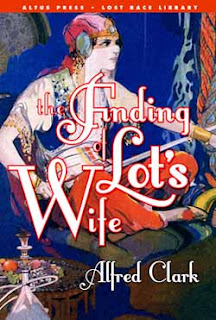 The Finding of Lot's Wife is a lost world adventure tale. The author was a certain Alfred Clark, of whom I know nothing whatsoever. I am more than a little addicted to lost world stories and this is a rather obscure example of the genre.

While the book was apparently published in 1896 there is some evidence that the events it purports to describe happened somewhat earlier. There is what appears to be a reference to the Crimean War as a contemporary event.

Hal Aylward is wealthy young Englishman who takes it into his head to go off travelling in the Middle East. He persuades his friend Noel Yorke, an artist, to accompany him. They eventually end up in Palestine where they hear a story that intrigues them. There is supposedly a Greek Orthodox monastery built on an inaccessible site in a hidden valley, a monastery that has not been visited by, or even seen by, any outsiders for centuries. The monks are reputed to live to an incredibly advanced age and to have lost the power of speech. They are fed, so the story goes, by ravens. There’s a suggestion that there is some connection between the monastery and the Biblical tale of Lot and his wife fleeing from God’s destruction of the Cities of the Plain.

It’s obviously a tall story but Noel is captivated by it and insists that they set out at once to find the lost monastery of St Lot.

They are deserted by their Arab guides but, suffering considerably from thirst and hunger,  are taken in by a wandering Bedouin tribe, the Beni Azaleh. The tribe has suffered misfortunes of its own. Some rather strange circumstances lead Aylward and Yorke to a remote valley and there, sure enough, is a monastery perched atop a pillar of rock.

This is indeed the monastery of St Lot but the monks are not unusually old nor have they lost the power of speech, nor are they dependent upon ravens for their food. It seems like a fairly ordinary monastery, except for its extreme isolation. The big surprise is that there are two guests already staying at the monastery, an American professor and his daughter (the daughter being disguised as a young boy).

There are however odd things happening at the monastery.Some odd things had also happened among the Beni Azaleh. The sheikh’s son had disappeared, and the sheikh had gone off to search for him, down a narrow defile in the rocks from which no traveler had ever been known to return. The sheikh did return, but at the cost of the loss of his reason. These various strange happenings are connected to the legend mentioned earlier. The two young English travellers will make the same descent that the sheikh had made, with frightening and horrible results.

I’m not sure if I’d call this an explicitly Christian adventure tale but obviously Christianity does play an important rôle. Of course in 1896 a writer would presume that most of his readers would be at least nominal Christians and would be reasonably familiar with Biblical tales, such as the fate of Lot’s wife. I don’t think a reader would actually need to be a Christian to appreciate this story.

There is some action, there’s a minor battle and there’s plenty of danger. The country itself is a bigger danger than any human foes, especially in the Valley of Madness.

The Arabs are treated in an even-handed manner. El Jezzar is certainly a true villain but the young Englishmen will owe their lives to the mullah of the Beni Azaleh who refuses to countenance cold-blooded murder. The story has two heroines, one an American girl and the other a Bedouin girl.

There’s some effective atmosphere in this story. The horrors of thirst, hunger, isolation and madness are palpable.

The Finding of Lot's Wife is perhaps a lost world story for lost world completists like myself but it’s a fairly entertaining book. If you are a lost world fanatic you’ll certainly want to add it to your reading list. Recommended.
Posted by dfordoom at 5:16 PM