Erle Stanley Gardner’s The Case of the Rolling Bones 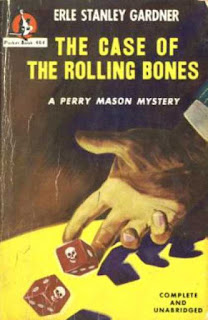 Erle Stanley Gardner’s 1939 Perry Mason mystery The Case of the Rolling Bones adheres closely to the formula Gardner had well and truly established. And it works beautifully.

Mason is hired by a young woman named Phyllis Leeds to protect the interests of her Uncle Alden. 72-year-old Alden Leeds made a fortune in the Alaskan goldfields at the beginning of the century and now he seems to be planning to marry. Alden’s relatives are not pleased as the marriage could spell the end of their expectations for hefty inheritances. They are trying to get the old boy committed to an asylum.

As is fairly usual in the Perry Mason novels there’s no question of murder, or any serious crime, until we’re a very long way into the book. There is however a definite puzzle. Or rather there are a number of puzzles. There are several intriguing questions of identity. There’s more than one marriage that is being obstructed. There’s also more than one missing person. And finally there’s the question of the loaded dice.

Of course all this does eventually lead to murder. Which raises those questions of identity again.

The timing of the murder should be straightforward. The apartment house in which the murder took place was under surveillance by the Paul Drake Detective Agency so the times at which various people arrived and left are known with complete certainty. But the timing still turns out to be problematic.

There are two major courtroom scenes. The first, in which Mason is attempting to block the family’s attempts to have Alden locked up in an asylum, is an absolute joy. Mason sets an exceptionally clever and devious trap for the opposing counsel who proceeds to walk right into it in the most eminently satisfying way. The second courtroom scene is perhaps not as amusing but it’s more dramatic.

In a Perry Mason story you expect Perry Mason to cut a few corners as far as legal ethics are concerned. Which is exactly what he does. You also expect the District Attorney’s office to be even less ethical, which is exactly what happens. The only real differences are that when Mason plays fast and loose with either ethics or the law he does so in order to protect the interests of his clients, and he does so with more skill than the D.A.’s office. As usual in Gardner’s novels the message is that if you’re accused of a crime you can’t trust the police or the D.A. to play fair so you’d better hope your lawyer knows all the legal tricks in the book.

This concern over the way that the legal system is stacked against the little guy is present in all the early Perry Mason novels but it’s especially marked in this case. In this story Mason pushes his ethical flexibility to the limit, but he does so because the D.A.’s office utilises outrageously illegal methods in attempting to entrap both his client and Mason himself. And Mason is prepared this time for a showdown on the matter - he’s prepared to put his career on the line to make his point.

Alibis play a major part in this mystery and if you’re a connoisseur of the art of busting unbreakable alibis you’ll be in bliss. Never use lamb chops as part of an alibi in a murder case - they can be treacherous witnesses.

Doubts about identity are a staple of detective fiction but this novel just keeps on adding more twists to the saga. Even Perry Mason has to admit he’s hopelessly confused about the identity of one key player. And every time the matter seems to be about to be resolved Gardner finds that he can extract one more twist from his plot.

Of course any Perry Mason story is going to be neatly plotted but this one is exceptionally strong in that area. There are colourful characters and some fascinating glimpses into the brutal life on the Klondike goldfields. It all adds up to a very entertaining novel indeed. Highly recommended.

The long-running Perry Mason TV series included some remarkably successful adaptations of Perry Mason novels sadly the adaptation of The Case of the Rolling Bones manages to eliminate all the really interesting elements of the book.
Posted by dfordoom at 5:22 AM