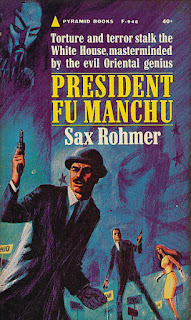 President Fu Manchu was the eighth of Sax Rohmer’s Fu Manchu novels. It appeared in 1936 and it marks an interesting departure for the series. Dr Fu Manchu has now turned his attention to American politics.

The date of publication is significant. The United States was still in the grip of the Great Depression and political instability seemed like a possibility. There had certainly been waves of political instability throughout the world since the Bolshevik Revolution and the Depression had made things even more dangerously unsettled. There were Hollywood movies like Gabriel Over the White House predicting a fascist takeover. Communism was gaining ground in most western countries. So Rohmer’s idea that Fu Manchu might see an opportunity for power was perhaps not quite so far-fetched as it seems today.

A priest who is a popular broadcaster is suddenly cut off in the middle of a broadcast. He was about to tell the American people something terribly important, warn them of some great danger. And now he cannot for the life of him remember what it was. The manuscript for the broadcast has been stolen as well. Federal agents now have the priest under guard in an old tower. Worse is to come - presidential candidate Dr Orwin Prescott has disappeared. That leaves only one viable candidate, Harvey Bragg. Federal Officer 56 knows that  Harvey Bragg is a mere puppet. If he is elected the real power will be in the hands of a sinister man in the shadows and Federal Officer 56 knows the identity of that man in the shadows.

Federal Officer 56 has been given sweeping powers, slightly surprising given that he is not an American. In the current crisis however he has been recognised as the only man who can save the situation. He is cagey about his identity although he claims that his name is Smith. The alert reader who is a keen fan of the Fu Manchu books will have a pretty shrewd idea of the identity of this Englishman named Smith.

Fu Manchu’s plan is even more devious than initial appearances would suggest. It looks like Fu Manchu intends Harvey Bragg to be his puppet but the real plan is more subtle. Its also not just about the presidential election. It has been suggested that just as the Roman Republic would appoint a dictator in times of crisis then the present crisis should be dealt with by electing an American dictator.

Dr Fu Manchu has managed to gain control of a large part of the American underworld and indirectly he has control of significant business interests and a grassroots political movement. Combined with his undeniable genius he should now be unstoppable but there’s a complicating factor. Fu Manchu’s American operation is on a vast scale and lavishly funded but it’s been put together in a hurry and it doesn’t work as smoothly as his previous operations in more familiar territory. Also he is dealing with people who are not the kinds of people he is used to dealing with. Many of them are not Asian and do not share his dream of Asian dominance over the West. They serve him for money or because they have been blackmailed or hypnotised but their loyalty cannot be entirely relied upon. This is an uncomfortable situation for Fu Manchu.

Of course Sir Denis Nayland Smith is in unfamiliar territory as well but he has adapted and he has been fortunate to find a thoroughly reliable lieutenant in the person of Marine Captain Mark Hepburn.

There is of course a mysterious dangerous glamorous woman with a slightly exotic air. In fact there are two such women, and Captain Hepburn has fallen for one of them.

Rohmer was obviously determined to make this a fresh entry in the series and tries very hard to make the American atmosphere effective. It’s the kind of American atmosphere you get from an imaginative writer who knows America from movies and pulp fiction but that just makes it more fun. The stuff about American politics is mostly fanciful although the 1930s was a time when it seemed like almost anything could happen in politics. Rohmer (probably sensibly) doesn’t really take an overt political position. Fu Manchu’s objective is the same as it has always been - to achieve the dominance of eastern over western civilisation. Gaining control of the U.S. is simply a means to this end.

As always in these books it is obvious that Rohmer admires his villain, Fu Manchu, just as much as he admires his hero, Sir Denis Nayland Smith. Fu Manchu is the ultimate expression of the genius of the East (as Rohmer saw things) while Nayland Smith represents the finest virtues of the West. Their struggle is not a struggle between civilisations and barbarism but a struggle between civilisations. Fu Manchu is ruthless but he believes that ruthlessness in such a worthy cause is not only justified but necessary. He is ruthless, but never dishonourable. And in this story as in quite a few other Fu Manchu shows himself to be capable of noble gestures that would be worthy of any hero.

President Fu Manchu is an intriguing attempt to do something slightly different within the formula Rohmer had already perfected and it succeeds pretty well. Like everything Rohmer wrote it’s vastly entertaining. Highly recommended.
Posted by dfordoom at 12:09 AM