Rex Stout's Under the Andes 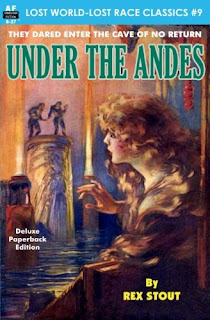 Rex Stout (1886-1975) wrote the first of his Nero Wolfe mysteries, Fer-de-Lance, in 1934. He would go on to wrote another 32 Nero Wolfe novels and a good number of other detective stories and would become one of the most celebrated mystery writers in America. But Stout’s literary career did not begin with Nero Wolfe. Between 1910 to 1916 he had written a considerable quantity of pulp fiction including a now almost forgotten lost world adventure story, Under the Andes. This tale was first published in All-Story Weekly in 1914.

Paul Lamar is a very rich young American, in his early thirties, fairly cultured and somewhat prone to fashionable ennui. His younger brother Harry seems to suffer from the same complaint but is more inclined to seek reckless solutions. Most recently he has been gambling heavily and foolishly. Paul is not worried by the money that Harry might lose. What concerns Paul more than anything else is the family name. It seems that Harry has learnt his lesson in regards to gambling but now a much more serious temptation has appeared. That temptation is Desiree La Mire. La Mire is a dancer. Her origins are shrouded in mystery. Her respectability is open to debate. Her beauty and the fascination she exercises over men are beyond dispute.

Paul decides that the most sensible thing to do is to indulge Harry’s obsession. La Mire will soon tire of the boy. Paul hires a luxury steam yacht and the three of them set out on a pleasure cruise. In Peru they take a detour. On a whim they set off into the Andes and there they discover a mysterious cave. Their guide assures them that the cave is well-known, it is connected to a legend of the disappearance of a large party of Incas transporting an immense quantity of gold, and he tells them that they must on no account the cave. Many have entered that cave in search of gold. None have returned. But of course they do go into the cave.

Getting into the cave was easy. Getting out again seems quite impossible.

What they find in the cave is a lost world, but it’s not exactly a lost civilisation. Or rather it was a civilisation but it isn’t one now. The idea of cultures regressing or degenerating was something that was a minor obsession in late Victorian times. This culture has certainly degenerated.

It’s also a world of darkness. Much of the terror in fact stems from the almost complete darkness. Mind you there are other things, real things, to be afraid of as well. There are people, or what used to be people, and they are not friendly. And there may be monsters as well.

The action is pretty near non-stop. No sooner have our adventurers escaped from one deadly danger than they are plunged into some new and ever more harrowing peril. The fact, in this world of darkness, the dangers are mostly unseen adds to the horror (and Stout uses the darkness as a source of terror and mystery with consummate skill).

There are some other interesting features to this novel. Paul Lamar is a man who believes he has exhausted all of life’s sources of joy and interest. He is bored and perhaps more than half in love with death. This novel was written in 1914 and it has a certain fin de siècle flavour to it. Paul Lamar could be the hero of a decadent novel of the 1890s. When faced with any new danger Paul’s first instinct is to give up and welcome oblivion. The problem he has is that he feels some responsibility to his younger brother so he has to keep fighting even though his heart is not in the struggle. Paul Lamar is a very unusual hero for a tale of adventure.

Desiree La Mire is also an unusual adventure story heroine. Like Paul she seems as if she would be more at home in a decadent novel.

So Under the Andes is a strange collision between the world of literary decadence and the world of pulp fiction. As an adventure story it works extremely well and its odd literary flavour makes it rather intriguing. Highly recommended.
Posted by dfordoom at 1:09 AM