Monkey Planet (Planet of the Apes) 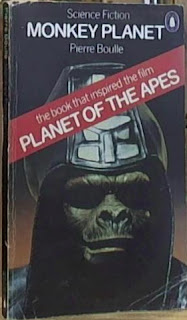 Pierre Boulle was a successful French author whose novel The Bridge over the River Kwai was turned into a blockbuster movie during the 50s. His 1963 novel La Planète des Singes (Monkey Planet) became a major pop culture phenomenon when it was filmed in 1968 as Planet of the Apes.

Surprisingly perhaps the film was fairly faithful to the novel. While the details have been subject to numerous changes the general plot outline is still more or less the same and the themes and even the tone remain substantially very similar. All of the really clever ideas that are to be found in the film were in the novel. The film-makers deserve praise for recognising the essential elements in Boulle’s story and hanging on to them, and for not trying to dumb down the ideas. They also deserve praise for realising that the movie would work best if played fairly straight. The novel is not always played straight and is clearly intended as satire but any attempt to copy the novel’s slightly jokey tone would have been disastrous in the film.

The novel has a framing story (which is utilised for a purpose which will be obvious to an alert reader and very obvious indeed to anyone who has seen the movie). A couple of space tourists find a message in a bottle in space. It’s an account of a voyage of exploration from Earth to the star Betelgeuse three hundred light-years away. It is a scientific expedition and on one of the planets orbiting Betelgeuse they find a society run by highly intelligent apes in which humans are mere animals, incapable of intelligent thought.

The narrator, who believes he is the only survivor, is captured and taken to a scientific institute where ape scientists carry out experiments on the lower animals, such as men.

Cornelius is at this very moment involves in an archaeological project which may also be very disturbing to the ape establishment.

Of course at some stage the book is going to have to explain exactly how the apes became intelligent while humans became dumb animals. There’s a great deal of dodgy pseudoscience and technobabble and it has to be said this aspect of the story is handled much more skilfully in the 1968 movie. The big shock revelations are also done much more effectively in the movie. As I said earlier, all the really good ideas in the movie are Boulle’s and are in the novel but they‘re all executed much more effectively in the movie. Overall the novel seems a bit clunky and a bit contrived compared to the film.

One of the more interesting ideas in the book is the difference between originality and imitation, and between civilisations that are original and those that are just imitative. This also touches on the nature of intelligence. There’s also interesting speculation on the rise and fall of civilisations and on the question of societal evolution versus societal degeneration. Boulle certainly tackles plenty of intriguing topics.

One element in the novel that is merely touched on in the movie is that there are three species of intelligent ape, chimpanzees, gorillas and orang-outangs, and the three species are by no means equal. This is something that the film-makers obviously decided, no doubt wisely, to approach with extreme caution. In the novel it is quite a big deal.

Monkey Planet is interesting since it’s clearly intended as a satire but exactly what is it satirising? It would be tempting to see it as a satire on race but it is perhaps more a class satire than a race satire. Boulle also has a lot of fun at the expense of scientists. Monkey Planet is odd but interesting science fiction and is worth a read, but the 1968 Planet of the Apes movie improves on the novel quite a bit.
Posted by dfordoom at 3:19 AM

Email ThisBlogThis!Share to TwitterShare to FacebookShare to Pinterest
Labels: 1960s, B, science fiction