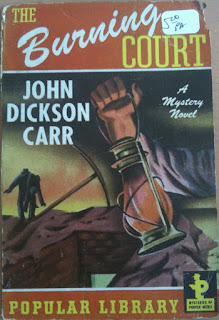 John Dickson Carr’s The Burning Court was published in 1937 and it starts off in a very gothic fashion. A man named Edward Stevens works in the editorial department of a fairly prestigious publishing house. He takes the train to his cottage at Crispen, not far from Philadelphia. He intends to occupy his time on the train reading a manuscript. The manuscript is by an author who specialises in accounts of forgotten but fascinating murder trials. Stevens has a shock in store for him. The manuscript includes a photograph of murderess Marie d’Aubray who was guillotined in 1861. But Marie d’Aubray is his wife’s name, and the woman in the photograph doesn’t just resemble his wife. She is his wife. There can be no doubt of it. Except that this woman was executed in 1861 and his wife is alive and well in 1929 (when the novel takes place).

Carr had a real affinity for the gothic and he lays it on good and thick in this tale. He gives us ghostly apparitions, a woman who walks through walls, body-snatching, ancient hereditary evils and gruesome scenes in crypts. We never really believe there’s anything supernatural going on (Carr at this stage of his career was not going to transgress such a crucial convention of the genre) but it does succeed in giving us the feeling that something sinister is definitely going on. There might not be any ghosts but there’s certainly been dirty work at the cross-roads.

Stevens’ cottage is not far from the estate of the Despard family. Old Miles Despard (who was actually only middle-aged has recently died) and his considerable fortune will go to his younger brother’s three children Mark, Edith and Ogden. Stevens and Mark Despard are on very friendly terms so Stevens agrees to a very curious request from Mark - to join him in a spot of grave-robbing. All in a good cause.

There is some question mark over the death of Miles. The cup that is known to have contained arsenic is a definite worry. The lady who was seen to visit Miles and then left his room through a non-existent door is also a slight cause for concern.

The fortune left by Miles provides obvious motives. There are however some very strong links to celebrated cases of poisoning that occurred in the past, one in the nineteenth century and one in the seventeenth (incidentally the burning court of the title is a seventeenth-century tribunal that meted out justice to poisoners). Those poisonings seemed to have been motivated by something much more evil than mere hope of monetary gain.

This is John Dickson Carr so of course you’re expecting a locked-room puzzle. Actually you get two impossible crimes, or at least two criminal situations containing impossibilities, including a locked-crypt puzzle!

This is not just a detective story with gothic trappings. While it is a detective story it is also a true gothic novel, with the gothic elements fully integrated into the story and handled with skill and also surprising subtlety. It’s unusual for 1930s Carr in having an American setting. This was an interesting and obviously deliberate choice on his part - he’s giving us a story of murder and evil with roots going back several centuries and with references to seventeenth century books on witchcraft so it would have been an obvious move to set in a decaying castle in England or central Europe but Carr sets it in a decaying seventeenth century mansion in Philadelphia, which gives us a wonderful collision of the gothic and the modern.

Carr delivers some bravura plotting in this novel. So many clues, and so many of them so ambiguous, so much misdirection. This is a novel that does not rely on the impossible crime problem. That’s just another element in a fantastically intricate plot with alibis being set up and then exploded with abandon.

We also get a very unusual detective although you won’t know that until quite late.

I still haven’t quite decided how I feel about the ending but there’s no question that The Burning Court is an unusual and fascinating novel filled to bursting point with staggering amounts of brilliance. Even if you decide you hate it you won’t forget it.

Once you’ve read the book you might want to check out JJ’s review at The Invisible Event. There’s  a lively discussion of that ending in the comments section. But read the book first!
Posted by dfordoom at 3:20 AM