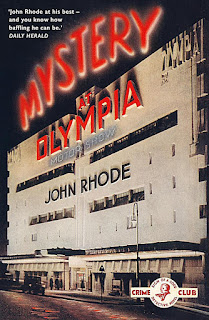 Mystery at Olympia (AKA Murder at the Motor Show) is a 1935 Dr Priestley mystery written by Cecil John Charles Street (1884-1964) under the name John Rhode.

At the Olympia Motor Show, in an immense crowd gathered around Stand 1001 to see the new and revolutionary touring car from the Comet Motor Company, an elderly man collapses and dies. This happens more or less right in front of Dr Priestley’s old friend Dr Oldland, whose efforts to save the man are unavailing. The elderly man is Nahum Pershore, a rather wealthy speculative builder.

At almost the same moment a pretty young parlourmaid in Mr Pershore’s household is taken violently ill. A Dr Formby is called in and he immediately suspects arsenic poisoning.

The post mortem on Mr Pershore raises more questions than it answers. Some very odd things have clearly been going on at the Pershore residence and it’s obvious that someone  didn’t like Nahum Pershore. What is not obvious is whether he was murdered or not, and if so how.

In a John Rhode mystery you expect some cleverness when it comes to the method of despatching the murder victim or victims. In this book the author plays a number of different games with murder methods.

You also expect that science will play some part in the crime and in the solution. And in this instance there are some esoteric matters of forensic medicine involved.

This is also arguably an impossible crime story. There’s a man who is dead but he has no right to be. And what was a man who had zero interest in cars doing at a motor show?

As to the solution, there is perhaps a slight plausibility problem.

As usual it’s Superintendent Hanslet who does most of the investigating. He’s the principal detective character with Dr Priestley remaining in the background. And as usual Hanslet is wrong on just about every point. He has a great enthusiasm for constructing elaborate theories and a lack of evidence to support those theories is something he really doesn’t worry about. Priestley’s interpretations of the evidence are of course very much sounder. And while Dr Priestley appears to be taking no active part in the investigation this is not quite the case. He is constantly feeding Hanslet hints that, with luck, will eventually put the superintendent on the right track.

Hanslet is dogged and he’s thorough but I have to say that I would be very very worried if I happened to be an innocent person who was a suspect in one of his investigations. Superintendent Hanslet’s powers of imagination are impressive but his powers of detection leave quite a lot to be desired.

It became increasingly rare for Priestley to go out into the field so to speak. He came to prefer sitting in comfort in his own home whilst pulling the strings of the police investigation. In his 1930s mysteries he was more inclined to take an active role when he considered it to be absolutely essential. In this case he does pay a visit to the Motor Show in order to confirm a very strong suspicion.

Mystery at Olympia contains most of the ingredients that John Rhode fans tend to enjoy - exotic murder methods, some fun with alibis, questions about wills, some esoteric forensic science and an enthusiasm for technology (the author was clearly a bit of a motoring buff). Dr Priestley is his usual mercilessly unsentimental self (with a characteristic touch of ruthlessness at the end). Whether the book stretches credibility a bit too far in one key element is up to the reader to decide.

On the whole I highly recommend this one. And it’s readily available in an affordable brand new paperback edition!
Posted by dfordoom at 4:12 AM